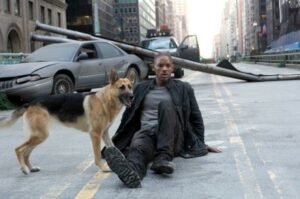 It took a long time to get a modern version of I Am Legend on the big screen. It had been The Last Man on Earth in the sixties, and The Omega Man in the seventies before Will Smith finally starred in the last version in 2007.

We say last version because apparently there are plans to reboot I Am Legend, which was a huge hit world-wide. There has been talk of a prequel, as well as a sequel, even though Smith died at the end, and now apparently they’re going the reboot route.

As Deadline reports, there’s a screenplay that Warners owns called A Garden at the End of the World, which is being described as a sci-fi / horror version of The Searchers, and now apparently it’s going to be redone as a Legend reboot.

The late Richard Matheson, who wrote Legend, along with Duel, The Incredible Shrinking Man, and many other classic stories, had joked that I Am Legend would probably be remade three more times in his lifetime. Matheson was in his eighties when he made this quip, but if he was able to live to 100, maybe he would have been right.

Could Avengers 3 Be a Two Parter?

Joaquin Phoenix Out As Doctor Strange