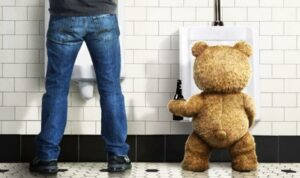 We figured a Ted sequel was inevitable, and sure enough, it’s getting ramped up for a 2015 production with a projected June 26, 2015 release date.

Among the big movie news that came this week included the casting report that Morgan Freeman will be aboard for Ted 2. Yes, the foul mouthed teddy bear created by Seth MacFarlane that made a ton of money ($549 million world-wide) will be back, and Variety tells us there’s going to be other A-list cameos as well.

Morgan Freeman’s certainly done comedy before, and his wonderful, serious delivery can make the next Ted film even funnier. Freeman’s role? Details are sketchy at the moment, but apparently Morgan may be playing a lawyer who helps Ted get out of a legal jam.

So it’s definitely a long way from March of the Penguins, hell Ted is quite a ways away from The Electric Company, but we’re definitely looking forward to seeing what Freeman can bring to Seth MacFarlane’s follow up next summer.

Can Apple really change the world?