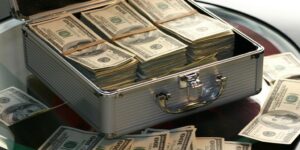 Editor’s Note: This article was first published on Vulcan Post

Hailed as a watershed moment for Asian representation in Hollywood, the movie ‘Crazy Rich Asians’ presents Asia’s ultra-wealthy affluence. The film is a voyeuristic smorgasbord, introducing us to people who will spend US$1 million on a pair of earrings, decorate their entire house in gold and hold bachelor parties on private islands.

But the scenes of excess are a far cry from the true lifestyles of Asia’s ultra-wealthy, who often lead more conservative, low-key existences than their peers in other parts of the world.

One person who managed to stay out of the public’s attention is Hong Kong’s billionaire Calvin Lo (盧啟賢). He is publicity-shy, never gives interviews or appears in public, and little is known about his personal life, which makes this story that much more fascinating. Learning about a person as complex and private as Lo is difficult: studying what few public documents are available about him; even showing up at the rare public business or event he was likely to be attending. Lo himself politely stated that he did not want to be interviewed or photographed.

After digging deeper into Lo, it quickly emerged that he has transformed his company R.E. Lee International as the world’s largest and most successful life insurance broker, making him one of the richest people in Hong Kong. Forbes estimates Lo’s personal net worth at US$1.7 billion. The London Economic describes this private CEO as the richest person that no one has ever heard of. An epitome of stealth, there is barely any pictures of Lo around.

But even billionaires who consciously stay under the radar and take whatever measures to avoid the press will occasionally surface in the public eye. Earlier this year, Lo’s romance with Hong Kong actress Bernice Liu (廖碧兒) went public. As their romance continue to develop, so did the public’s interest – they couldn’t get enough of it. There is something exhilarating and romantic about a supremely wealthy CEO and a beautiful actress being together. It screams class and glamour. By all accounts, Lo and Liu make a perfect couple as they are both incredibly attractive, successful in their industry and share the same love for fine wines. All the makings of a fairytale love story coming to life.

While Lo’s lifestyle is like a world apart from the ostentatious display of wealth in ‘Crazy Rich Asians’, there is one commonality: Eleanor Young, the imperious and regal character in the movie. They are both wealthy, poised, powerful, protective and relentlessly humble. And as things turn out, Michelle Yeoh (楊紫瓊), the Malaysian actress who plays Eleanor Young, is good friends with Lo where they often wine and dine together.

If Lo has looked within himself and found a talent that has enabled him to prosper so extraordinarily, he hasn’t told friends or business associates about it. It’s been said that his success to qualities both mundane (focus, discipline) and rare: extraordinary patience; a knack for spotting economic and social trends long before anyone else; a charming negotiating style; and an ability to engender enormous trust and loyalty in others.

While the newer nouveau riche use typical in-your-face tactics to convey their wealth and status, the truly rich and ultra-sophisticated brag by quietly expanding their companies into formidable business empires, to which Lo seem to have mastered the skill of.