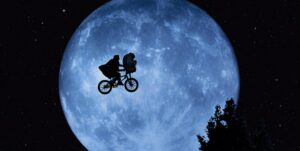 This year marks the thirty fifth anniversary of E.T. and the incredible genre summer of 1982 where so many great movies came out one after another.

Yet for every monster hit like E.T., there’s many sci-fi gems that didn’t reach the heights, but are still loved and well remembered to this day. Hell, even Blade Runner The Thing and Tron weren’t hits right away, but they’ve absolutely stood the test of time. What other sci-fi films are there that should be rediscovered? Here’s just a few that Giant Freakin Robot listed that they feel would make good double bills with the E.T. Blu-ray.

First one on the list is one I’ve always been a fan of, The Last Starfighter, where a video game nut is recruited to fly in outer space by aliens. Starfighter was directed by John Carpenter alumni Nick Castle (he played Michael Myers in the first Halloween and co-wrote Escape From New York), and it featured state of the art computer effects for the time.

Also listed is Enemy Mine, directed by Wolfgang Petersen, where Dennis Quaid and alien Louis Gossett Jr. have to learn to co-exist, much like Tony Curtis and Sidney Poitier had to learn to work together as escaped prisoners in The Defiant Ones.

Like Starfighter, Enemy Mine wasn’t a hit in its time, but both are still beloved to this day.

As far as family friendly movies that would be great with E.T., The Iron Giant is a perfect choice, yet it’s not a film strictly for kids. Giant is truly a wonderful movie for people of all ages that infuriatingly never got its due. Brad Bird went on to great heights with The Incredibles and Mission: Impossible Ghost Protocol. Still, David Wharton writes that even with Bird’s work with The Incredibles and the Simpsons, “I’ll argue to my dying day that The Iron Giant is still the best thing he’s ever done.”

There’s also plenty of mad geek love for Galaxy Quest to this day, and as big of following as it has today, it still hasn’t gotten its due either.

A more recent flick that Giant Robot recommends that would indeed make a good double bill with E.T. is JJ Abrams’s Super 8, which took many of us back to the early days of the Amblin’ films we geeks hold very dear.

It would definitely be fun to mix and match these films along with E.T., and see how they flow together back to back.

And while these may not be appropriate for all age viewing, two other sci-fi gems I recommend you watch again are No Escape and Night of the Comet.

5 Must Have Plugins for Your WordPress Blog

Buffet: The Nuptial of Food and Fireworks