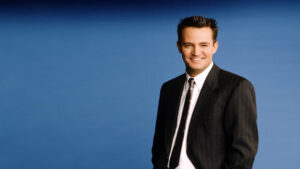 “I desperately needed money when I picked up Chandler’s role”, said Matthew Perry in 1997. We bet he wouldn’t say the same now. Perry, aka Chandler, turns 47 on Friday.

His sarcastic comments, bordering on caustic humour, helped build the character that is a cult on world television today. He’s worked on a bunch of sitcoms and movies, the Bing character however overpowers every thing else.

Here’s a curation of some of his punchiest comments.

When He Took a Dig at Ross, Impressed His Girlfriend in the Process

Oh Bing, you’re one of a kind! (Photo Courtesy:Tumblr)

There’s NO stopping this man, is There Now?

Here is Chandler Bing giving the strangest advices to everyone. (Photo Courtesy:Tumblr)

When Rachel is Welcomed With a Bing-Comment

When Rachel returns from her ex-fiancé’s wedding, this is what Chandler has to say. (Photo Courtesy:Tumblr)

Phoebe and Chandler: the Entwined Twins

Because nothing in the world can beat Joe’s intelligence (or its lack?). (Photo Courtesy:Tumblr)

Oh, Joe! You Just Ask For It

And another gem from Chandler’s repertoire. (Photo Courtesy: Tumblr)

Don’t All of Us Need a Warm Bath After a Tiring Day?

Yes, we do. (Photo Courtesy: Tumblr)

The Mercedes-Maybach 6 Coupe Concept, A Jewel We’d Love to see