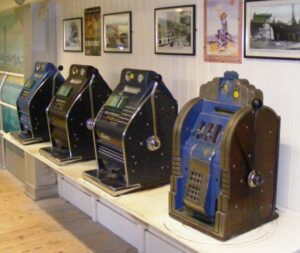 The first slot machine, also known as “one armed bandit” or “fruit machine”, as we know it today was invented by the German born Charles Frey in San Francisco, somewhere between 1887 and 1895.

A Brooklyn based company had already developed a gambling machine based on poker which used five drums each with 10 card faces but it had no payout mechanism and players would get a free drink or cigars, depending on the hand they had or what the local bar had to offer.

Charles Frey designed the first mechanical slot machine with an automatic payout system; the first of its kind that actually paid out coins without the need of attendance, that is where the name comes from, “slot machine” from the slots on the machine for inserting and retrieving coins.

The concept of the first slot machine was quite simple, the machine had three spinning reels containing a total of five symbols – horseshoes, diamonds, spades, hearts, and a Liberty Bell. By replacing ten cards with five symbols and using three reels instead of five drums, it was much easier to read a win, allowing Fey to devise an effective automatic payout mechanism which the poker machines did not have.  The bell symbol gave the first slot machine its name, “Liberty Bell”.

Frey’s machine was very successful and soon filled San Francisco’s bars and pubs, but because gambling was illegal in California, Frey couldn’t patent his machine and other manufacturers successfully copied and distributed his machine around the country.

The first electromechanical slot machine, the Honey Money, was developed in 1963. It enabled payouts from up to 500 coins, compared to the maximum 50 cents  Frey’s machine could payout, and also did away with the mechanical side lever that gave slot machines the nickname “one armed bandits”. Although the lever could still be seen for years to come, it wasn’t actually necessary.

In 1976 the Las-Vegas based Fortune Coin Co. introduced the first true video slot machine which used a 19 inch Sony Trinitron display and logic boards for the slot machine functions. After initial trials in the Las Vegas Hilton Hotel Lobby, and some modifications, the video slot machines were approved by the Nevada State Gaming Commission paving the way for their enormous popularity in Las Vegas and casinos all around the world.

Two of the main features that computers made possible were

If you visit an online casino with slot machines like LeoVegas for example, you can get a picture of the unlimited choice in themes

And you can also get the idea of multiple paylines, they can be horizontal, vertical, diagonal and even zig zag.

In the following example there are ten different paylines on a five reel game.

With the introduction of digital technology, the simple three reel slot machine from 1895 has evolved into an entertaining complex game that you can even play on your smartphone on the train to work. Another good side effect of modern technology is that it has made it convenient for authorities to control and monitor the software used in slot machines to make sure that winning, or losing, is a matter of luck not manipulation.