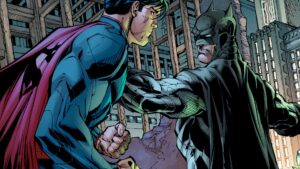 Has the debate over which superhero is superior finally come to an end? So, who is the best-equipped superheroes?

Is it Superman with his unbelievable speed? Batman with his cool gizmos? Wolverine with his razor sharp blades? Or Mystique with her ability to shapeshift into anyone? Or, is it Hulk with his incredible strength?

Well according to a study at the University of Leicester in the UK, it is none other than DC’s Superman who takes away the crown.

Followed closely by Marvel’s Wolverine, Mystique and Thor, according to the research that also suggests that Batman may be the most disadvantaged in terms of special powers.

Are the superhuman abilities displayed by the characters in films and comic books in fact possible? (Photo Courtesy: dccomics.com)

Students at the university used simple calculations to explain the feasibility of the powers behind of some of the most prominent comic book superheroes from around the world.

The student research attempted to study whether or not the superhuman abilities displayed by the famous characters in films and comic books are in fact possible or not.

While Black Bolt–the ruler of the Inhumans( a reclusive race of genetically altered superhumans), may be the most destructive of all superheroes, with his capability to annihilate planetary systems, the study suggests that the ‘Last Son of Krypton’ Superman is likely to be the best equipped to win in an epic clash between all of the studied superheroes.

Make way for the winner!

Boasting a super-powered array of skills, Superman, if obeying the ‘Law of Energy Conservation’, could exhibit a calculated stored solar energy output of over 700 thousand Joules per second for his ‘Super Flare’ attack.

It is also shown that the ‘Man of Steel’, in theory, could have higher density muscle tissue than the average human, which could aid in several of his superhuman abilities.

This incredible display of power makes Superman the number one candidate for most powerful superhero.

X-Men duo Wolverine and Mystique are not far behind…

Honorable mentions go out to the X-Men duo–Wolverine and Mystique, who were close contenders for the title of world’s finest with their incredible mutant abilities – which allows Wolverine to regenerate his cells, and Mystique to manipulate genes.

Thor would be one of the most formidable superheroes. (Photo Courtesy:wallpapervortex.com)

But what about Batman?

This is not good news for Batman. (Photo Courtesy: dccomics.com)

With the strongest superhero already determined, the study also shed light on who the most ill-equipped superhero might be – with a seemingly grim end result for Gotham’s ‘Caped Crusader’, Batman.

Though his cape proves to be of vital utility when gliding, the student-led research suggests that when gliding Batman reaches a velocity of around 80 kilometres per hour – which could be fatal upon landing.

This inability to perform even the simplest of superhero feats suggest Batman would struggle to get off the ground.

The Trials and Tribulations of a Non GOT Watcher

Facebook Activates Safety Check Feature in US for the First Time