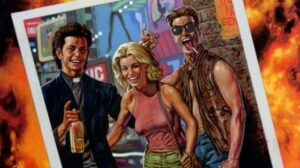 Some time back, we reported that the graphic novel series Preacher was going to be brought to AMC by Seth Rogen, of all people, and now the lead has apparently been cast.

According to The Wrap, Dominic Cooper will play Jesse Custer for the “imminent” pilot of the show. As comic fans know, Preacher is a very popular graphic novel that was created in the ‘90’s by Garth Ennis and Steve Dillon, and although Rogen and his partner Evan Goldberg are producing, we’re sure this will be a faithful adaptation free of the usual goofball stoner humor Rogen is famous for.

Cooper’s star is on the rise right now in Hollywood, playing Howard Stark on Agent Carter, and he’s also going to be in Warcraft, the big screen adaptation of World of Warcraft, which is coming next March from Universal Pictures.

We get the impression the powers that be are trying to make another Walking Dead, a series based on a dark graphic novel that could crossover and be a hit with mainstream audiences. According to the A.V. Club, production on Preacher starts this summer.

Refurbished, reconditioned and remanufactured – what do these terms really mean?

Batman Vs Superman Trailer Is Here