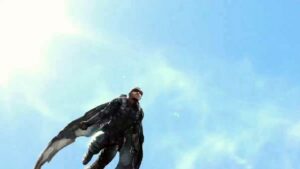 We just ran a report here on TG about the rumors going around that the next Spider-Man could be African American. Now there’s reports that the Falcon will be in the next Avengers film.

The Falcon was a prominent African American superhero from Marvel who often worked in cahoots with Captain America, and Anthony Macke brought him to life in Captain America The Winter Soldier. Now apparently he’s on the next Avengers team because Cinema Blend noticed his name was on the poster.

Mackie was coy with the press, saying he “hoped” he would be part of the team, but we all know with these flicks that secrecy is a must. It was also rumored that Ant Man would be part of Ultron, but apparently he’s not in the movie, and Joss Whedon recently explained why.

As he told Empire, “The fact of the matter was, Edgar [Wright] had Antman first and by virtue of what Edgar was doing, there was no way for me to use him in this. I also thought it was a bridge too far. Ultron needs to be the brainchild of the Avengers, and in the world of the Avengers, Tony Stark is that guy…It didn’t make sense to introduce a third scientist…”

Wonder Woman Movie to Shoot in the Fall

The Power Rangers Bootleg Movie and the Legalities of Fandom