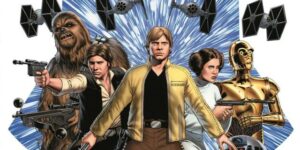 Marvel and Lucasfilm are both owned by Disney, and it was announced last year that the Star Wars comics would come back to Marvel. Now the first issue of the new Marvel Star Wars comic is out, and the verdict, according to one publication?

Well, apparently pretty great, and a great return to form if the Daily Beast is correct. Melissa Leon writes that the comic takes place between A New Hope and The Empire Strikes Back,  and she adds, “This truly feels like Star Wars in its original trilogy form: A fun, high-stakes space spectacle, with a whole lot of heart. “

That right there is enough to get our money, and it’s wonderful to think that the comics could recapture the same spirit of the original. (It’s sure a hell of a lot harder to capture it on film.) And in comics, it’s certainly a lot cheaper to tell a big, epic story. (You clearly don’t have to spend millions on CGI.)

The new Star Wars Marvel comics are now out in stores, with Jason Aaron writing, and John Cassaday doing the artwork. While we’re still waiting for The Force Awakens, we certainly hope the new Marvel series will keep us very satisfied while we wait. (Certainly a better way to bridge the gap than the Holiday Special.)

Avatar Sequels Pushed Back a year

Are These the Best Sci-Fi Films of All Time?