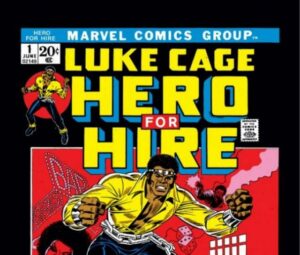 Everybody knows Iron Man, Spider-Man, and The Avengers, but how many people know Luke Cage: Hero For Hire? He was considered the Blaxploitation superhero, a reference to the African American movies of the ‘70’s like Shaft, and Cage was indeed superbad, with a big ‘fro, and heavy duty kung-fu moves.

Now Collider tell us that Mike Colter from The Good Wife will be playing Luke Cage, and it’s a prime role as his star is rising. In addition to playing a Marvel hero, he’s also the lead in the miniseries Halo: Nightfall, and if you’ve seen the trailer, where he’s prominently featured.

Terry Crews of Brooklyn Nine-Nine has said he would love to play Cage, but in any event, it’s a great superhero who’s been long overlooked. We have the feeling Luke Cage won’t be done retro ‘70’s style, but we still think it could be a very cool character for the Netflix Marvel series.

As the Hollywood Reporter tells us, Cage will debut in the Netflix Marvel series Jessica Jones, then will branch off into his own series. The series heroes, Daredevil, Luke Cage, Jessica Jones, and Iron Fist, are also reportedly going to all be brought together in The Defenders mini-series, and this will all be coming together next year.

Star Trek 3 Officially Has a Director