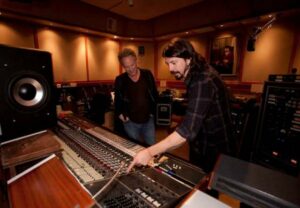 You may not be immediately familiar with the recording studio Sound City, but you certainly know the music that was recorded there, like Tom Petty’s Damn the Torpedoes, Neil Young’s After the Gold Rush, and Nirvana’s Nevermind, to name a few. The place also got a major revival thanks to Dave Grohl, who made a documentary about it, and purchased its soundboard.

Now Rolling Stone tells us that the owner of Sound City, Tom Skeeter, has died at the age of 82. It marks the end of another era for a legendary studio, and Grohl was not only able to tell the world about how great Sound City was, but he has one of its most legendary pieces of equipment forever.

As Grohl told Rolling Stone, Nirvana went to Sound City for sixteen days to record Nevermind, not with “the intention that we were going to change the f*ckin’ world. We just wanted it to sound good…The fact that what happened actually, happened, makes me think there’s something more than just wired and knobs in that place. Personally, I have a strong emotional connection to it.”

Indeed, there’s more to any piece of musical equipment than the sheer electronics, it’s the magic people bring to it, and with Sound City, Tom Skeeter did indeed launch a magic place that has been remembered long after the collapse of the music industry forced it to close its doors.