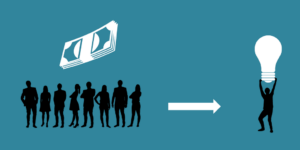 An initial coin offering is a process by which a cryptocurrency startup or blockchain venture raises funds to support its activities. The initial coin offering is mainly a presale of the company’s token in the form of digital coins in exchange for another cryptocurrency like BTC, ETH and so on. ICOs are like Initial Public Offering (IPOs), however, the two differ on the value attached to the token. For an ICO, the token is a store of value and can be resold at a later date for a profit or be used to transact on the cryptocurrency network. On the hand, the IPO offers investors a stake in the ownership of the company.

An initial coin offering is also referred to as a crowdsale. This is due to the fact that during the campaign, participants buy the cryptocurrency’s token coins using either fiat currencies or crypto coins like Bitcoin and Ethereum.

ICOs have also been compared to Crowdfunding; they both offer an investor a chance for early access to the product. However, there are some differences between the two:

In recent times, initial coin offerings have been referred to as the new Crowdfunding of the cryptocurrency era. In other words, an ICO presale has become the most common method for startups to get funds for their projects.

How does an ICO work?

The process that a cryptocurrency startup goes through to raise funds is always an elaborate one. Even then, some rogue elements have leveraged the popularity of major blockchain currencies like Bitcoin and Ethereum to defraud the public.

So, how do you know that this or that project is serious and at the least, holds a promise of fulfilling its promises?

Here is what a cryptocurrency startup does when it wants to hold an initial coin offering.

Before it rolls out its plan to the public, the ICO team develops a document called a whitepaper. It is the most important document of any ICO as it explains the product to the intended backers, providing explanations of the applicable use cases. The whitepaper sets out the main idea behind the project. It will also have the following information:

An ICO project can be launched in phases, usually a presale and sale. After that, there is what we call a commercial release where those who didn’t participate in the first phases get a chance to purchase the tokens. The ICO is first popularized through social media and hyped to get maximum attention from the public.

When an ICO has to be launched supporters buy a percentage of the distributed coins at a set price that is usually in the form of Bitcoin or Ether.

The ICO developers then go ahead to collect the funds within the period indicated in the whitepaper. If the targeted amount is reached, the ICO has declared a success and the initial phases of project implementation can begin.

What were some of the most successful ICOs ever seen?

There have been hundreds of initial coin offerings since the first one launched in 2013. If we measure success in terms of the funds raised, then the most successful ICO was done by Hdac which raised $258 million in its ICO. But if we go by the eventual success of the project, then we can’t go further than Ethereum. Ethereum has been by far the most successful ICO on whose EVM and Smart Contracts have led to the development of several other successful ICOs, notably Bancor that raised $153 million in just 3 hours.

At the moment, ICOs are largely unregulated and allowed in many countries around the world. As a result, coin offerings are preferred by crypto startups because they offer an easy way for the project teams to access huge sums of funds. This is especially important as the team behind an ICO uses the coin offering to avoid the rigors and tight regulations adhered to by Venture Capitalists and banks.

However, 2017 saw heightened efforts by governments around the world seeking ways of regulating the ICO ecosystem. These are said to be in the interest of the public and to ensure that everything is within the law.

Are there concerns against ICOs?

Unfortunately yes, there are. Coin offerings have been accused of being fraudulent Ponzi schemes, money laundering channels and heaven for criminal funding. That’s why there are requirements for ICO developers to adhere to Anti Money Laundering (AML) and Know Your Customer (KYC) regulations.

In extreme cases, ICOs have been banned; like in the case of China that has banned coin offerings in the country. What was the reasoning of Chinese authorities for the banning ICOs? In September 2017, China’s Central Bank issued a statement indicating that ICOs were risky and would be disruptive to the country’s economy. It also stated that coin offerings were a threat to financial stability. The ban also involved completed ICOs being asked to refund all the investors.

In the U.S the Securities and Exchanges Commission (SEC) and the Commodity Futures Trading Commission (CFTC) are considering the best way forward for ICOs. However, they all insist that the companies seeking to undertake Initial Coin Offerings should do so within the law.

Similar sentiments are given by other governments around the world who have severally warned that ICOs are risky ventures that the public should avoid.

An Initial Coin Offering is a presale of a cryptocurrency startup’s token coins in exchange for funds from project enthusiasts. While it is the easiest way for a startup to access the funds, ICOs have also faced criticism for being avenues of defrauding the public. As such, everyone looking to engage in an ICO should be aware of the risks involved.

Five Ways to Buy the Refurbished MacBook of Your Dreams

Building a Community around your Brand through User Generated Content