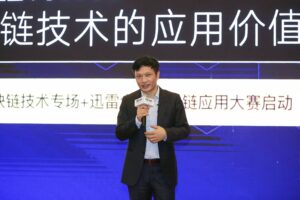 Today, cloud computing and blockchain might be the two of the hottest tech trends in science and technology. They look like the synonyms for “future”. So what if there is a company which integrates the two techs and what will the new “future” be?

One Chinese firm may be worth your attention. Xunlei, who is pioneering in commercializing blockchain and crowd sourced cloud technology for both enterprise and consumer use, recently launched a new blockchain platform called ThunderChain.

Thunder Chain is not a rootless tree. It is built on Xunlei’s cloud computing ecosystem, which supported by Xunlei’s other product, One Thing Cloud, a private cloud specifically designed for people who pursue the digital entertainment life with high quality.

The model of OneThing Cloud is based on a sharing economy concept: Users can share idle computing resources and storage when using the device through the participation in the “Onething Rewards Program”. Blockchain technology is adopted to guarantee open, transparent and tamper-resistant use of crowd sourced computing resources. Users get rewards in terms of digital tokens, Link Token, by sharing their resources and can use tokens to redeem other services from the company and its partners. Such idle resources can be then transferred into shared-computing services through Xunlei’s cloud computing technology, thus reducing operating costs of internet companies in the field of CDN.

In addition, OneThing Cloud provides people with quick download, storage and removing at any time, file management, remote control, multimedia entertainment and other functions.Files are stored on the OneThing Cloud but can be retrieved from a variety of devices like TVs, mobile phones, computer screens and tablets.

As reported by CoinDesk, ThunderChain is also an open blockchain platform and is designed to enable developers to build decentralization applications.In order to promote development of practical applications, the company at the same time announced the launch of its first-ever Global Blockchain Application Challenge.As the national level institution and guiding unit of the Challenge, Professional Commission of Blockchain of CCIA(China Commication Industry Assocition) issued Guidance Certificate to Xunlei at the event.

The competition is now open for registration and developers can submit their projects before June 15, 2018 for judge’s review. Confirmed judges include Alexander Ye (Risk Advisory Director at Deloitte), Chen Wenguang (Computer Science and Technology Professor at Tsinghua University) and Li Ming (Director of Blockchain Research Department at Ministry of Industry and Information Technology).

Final winners will be awarded opportunities to get project incubation fund and other resources to help further develop their projects, technology and skills. And you can get more information from here: https://open.onethingcloud.com/en/site/comp.html

How to Launch a Successful Mobile App