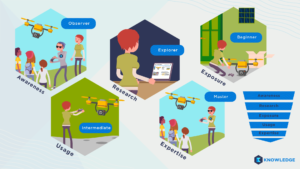 Spending on digital advertising is expected to reach $223 billion this year, according to eMarketer. But there remains plenty of abuse. As much as $16 billion is wasted because of fake traffic created by clickbots, and fraudulent advertisements is expected to reach $50 billion per year by 2025.

Blockchain technology may solve inefficiencies in the industry. A new platform called Knowledge.io wants to create valuable insights for advertisers by identifying the best talent in the world of online marketing and advertising through the use of Knowledge Scores. It’s a blockchain-supported measure of an advertiser’s expertise in his field. The validation process empowers companies to work with top talent who know how to avoid wasteful spending and optimize the impact of budgets.

“Innovation in ad tech has been centered mostly around automation of the buying process via programmatic and real-time bidding technologies, with the exception of native advertising,” says Marcia Hales, a co-founder. “The Knowledge Score idea came from the realization that most data providers in the ad tech space are using different algorithms on a relatively similar set of data, often with conflicting data points across providers, and generated by probabilistic methods using statistical algorithms which find likeness between groups of audiences.

Knowledge’s vetting process can be applied to other areas of marketing, such as social, mobile and email. The key is to identify and enlist talent in the field, and to measure their expertise — to leverage their insights and reward them with Knowledge tokens.

The economic impact of efficient spend is huge. For example, the Consumer Packaged Goods (CPG) industry now spends more on digital advertising than all other forms of marketing combined, according to a February 2017 study by Cadent Consulting Group.

“People consume content when they read an article, or interact with some consumer product but this technique cannot use deterministic methods to understand the knowledge-level of a user about a topic or set of topics contained within the article or related to a product, service, solution, location, etc.,” says Hales. “This is a new dimension in the targeting and messaging mix which can be achieved at scale, with a reward component in the form of Knowledge tokens for sharing this knowledge.”

Thus, advertisers can look to users’ Knowledge Scores to find out how well-versed people are in certain topics. An online marketplace can also serve as a venue for advertisers to get their products into the hands of target users who have shown domain expertise in a certain vertical.

Moreover, experts who have been awarded Knowledge tokens can spend their coins in such a marketplace. The founders hope this rewards system will grow the ecosystem and encourage more people to join. Knowledge.io will launch their ICO in January.

Playing the Game – How a Good Idea Becomes a Video Game