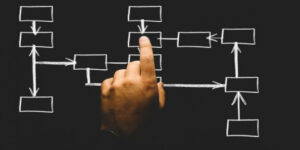 For the past year, blockchain has been presented as an earth shattering revelation to every industry. Experts and enthusiasts predicted that blockchain-based cryptocurrencies would replace fiat currency, make banks obsolete, and change the basis of the world economy forever.

While still early, it does that seem that the most drastic of these prophecies are being proved incorrect. Blockchain is a revolutionary technology, but is better better used as an improvement upon existing industries than outright competition. Properly used, blockchain could be used to exponentially improve the speed and security of any existing system. The question is: which ones can most benefit?

The peer-to-peer lending industry is growing at a torrid rate. According to Morgan Stanley, the industry will be worth more than $490 billion by 2020. As faith in traditional banking wanes, the more decentralized alternative credit market grows. Competitors like Lending Tree and Lending Club have sprouted up, proving that more flexible and cheaper alternatives to traditional banking is a desirable and sustainable market.

Furthermore, as millennials increasingly seek alternative forms of income to their jobs, P2P lending could provide an incredibly easy and secure way to gain a passive form of income. As the new technologically savvy generation comes of age, a new network for P2P lending could be coming of as age along with it.

However, one thing that is required for peer-to-peer markets to thrive is trust. Without trust, P2P cannot truly reach its potential as an industry. That is why blockchain could serve such a revolutionary role in the development of the industry.

Alchemy a blockchain based platform for P2P lending hopes to instill the transparency, security, and accountability that is allowing blockchain to disrupt so many other industries. Only with those qualities can lenders and borrowers feel comfortable engaging in peer-to-peer credit. Here’s how Alchemy works.

First, each potential borrower is thoroughly vetted by Alchemy before being able to engage with the community. Using AI and machine learning to technology to ensure superior background checks and potential risk is part of the ways Alchemy plans to maximize trust among users, and reduce risk for everybody involved. Potential borrowers then request their desired amount of capital and are matched with a lender based on their calculated risk, and the value of the amount is quickly and safely transferred over the system.

While simple, the use of blockchain allows Alchemy to improve upon existing models in many ways. Blockchain is secure, anonymous, and instantly and universally auditable. One would be hard-pressed to find a more trustworthy, secure mode for P2P lending- blockchain truly has the potential to transform the industry.

However, Alchemy’s business model doesn’t stop with simply the transferral of debt. After the credit is established, it is organized into “tranches” based on risk, and sorted into a Collateralized Debt Obligation (CDO) market. These CDO’s are then bought and sold over a global, secure, and instant network. Blockchain is not a destroyer of existing systems, but rather a tool to make existing model work better in every way.

What This Means For Blockchain

Companies like Alchemy represent a new generation of blockchain entrepreneurs. With a team composed of a team with decades of experience in lending, international finance, sales, and management, Alchemy is not the blockchain startup of the past few years.

Alchemy is a fully-developed business team with the intent to use blockchain as one asset of a superior business model. By complementing their blockchain tech with the AI technology, management, and experience it needs to thrive, Alchemy is putting blockchain in its best possible position to support and enhance an already viable business idea.

Regardless of whether blockchain and cryptocurrencies forever alter the world economy, those business that can properly utilize it as a democratizing, secure, and transparent tool will be the ones that most benefit from it. Amazon didn’t replace the brick-and-mortar store, but it certainly used the internet to open up markets and potential that otherwise would have been impossible.

How do you think blockchain’s role in business is evolving?