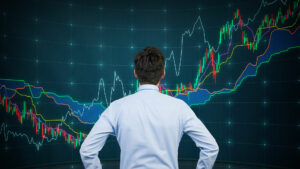 The cryptocurrency and forex markets always witness an influx of investors on daily basis, in pursuit of opportunities to make profit in long and short term. Investment plans, trading strategies and arbitrage are carried out in both, although they still differ in their own unique ways.

Origin of Bitcoin and Forex

In the 19th century, the gold standard was adopted worldwide, as currency exchange was still being considered by most traders. The worth of a currency was then being determined in relation to gold. This was seen as the standard method of evaluating currencies.

But as time went by, speculators and hedgers sought a way to preserve their wealth and make profit – by swapping currency. As the 20th century got closer, the evolution of technology helped in the transitioning of global currency exchange from physical to electronic. Then forex was born and most investors preferred the digitised method of transfer as compared to the traditional “over the counter” trading.

Advancements in technology have become dynamic and the advent of digitised trading meant that more was yet to come. In 2009, a digital form of money – Bitcoin (BTC) – was invented by a computer programmer. To the shock of financial experts, many internet based businesses accepted the bitcoin as a mode of payment – hence the birth of the word “Cryptocurrency”. By the end of 2013, its popularity had grown beyond all expectations.

Other cryptocurrencies, such as various ICOs, also sprouted from all corners of the internet, leading to a belief that digital money is the future.

For anyone who intends to trade forex or bitcoin, it’s wise to weigh in the pros and cons to enable them make an informed decision. Keep in mind that the stability, depth and liquidity is dependent on how large the market is. This applies to both forex and bitcoin markets.

In the last 20 years, the forex marketplace has grown to become one of the largest. But the rate at which bitcoin trading has blossomed since 2007 till date shows that cryptocurrency trading is growing at an alarming rate.

Forex trading involves the major currencies in the world – the US dollar, the Canadian dollar, the Japanese Yen, the Euro, the Pound Sterling amongst others. But Bitcoin, being just one out of many other cryptocurrencies, has proven to be desirable to investors still.

A report released by Coin Market Cap showed that the value of one Bitcoin increased to just over $4,000 in 2017 and is still likely to rise before the end of 2018. The market has a total market capitalisation valued at more than $72 billion (USD) – with over $1 billion (USD) as daily bitcoin market turnover. Although, forex has a daily turnover just about 200 times that of bitcoin, but it’s still good – for a marketplace that was established less than a decade ago (years after forex).

Advantages and disadvantages of trading Forex

No matter how stable a market is, it comes with its own good and bad sides. Forex might be considered pretty large and stable, but here are its own pros and cons:

The Forex market is believed to be more diverse as there are exotic, minor and major pairs available for trading. It has relative liquidity with a wide variety of popular currency pairing that also guarantees the depth of the market. There’s also a 50:1, 100:1 and even 200:1 leverage that brokerages offer to clients. This extensive leverage also makes it desirable.

It’s also worthy to note that foreign exchange rates are stable at most times, except under extraordinary circumstances where a country’s policies, political pressures, interest rate and other factors affect their currency value. Due to the volume of currencies being traded on a regular basis, fluctuations are bound to occur.

That being said, the drawbacks of Forex trading are that there can be a substantial cost associated with bid spread, fees and rollover. This is also linked to the unavailability of pricing volatility. This often leads to issues when it comes to making constant profit from the discrepancies in the exchange rates.

Also, the involvement of financial institutions cannot be ignored. Retail traders are usually placed at some disadvantage (competitively) by the high frequency traders, proprietary companies and investment banks.

Advantages and disadvantages of trading Bitcoin

The Bitcoin market might not be as large as Forex but it enjoys certain market liquidity and depth. Active traders can also benefit from the market in several ways. Here are some of the advantages and drawbacks:

The market is volatile. Value fluctuations are more than 5.2%. This could be because of the substantial daily trading range that is created by a limited float of Bitcoin.

Another good part is that conventional currency stimuli don’t lead to fluctuations in the Bitcoin market. Unlike forex where geopolitical issues, natural disasters and other factors in the country affect rates, the value of Bitcoin isn’t determined by any of that economic pressures or performance.

Furthermore, the cost of transactions in Bitcoin has limits. If you’re accessing the market directly, the cost of transaction is usually reduced to a large extent. But when transacting with a broker, these costs are checked when selling or buying the Bitcoin. Keep in mind that you don’t need some form of certificate or formal registration with a body to be able to access the Bitcoin market. Once you have enough capital and wish to access the market directly (or with the help of a broker), you are good to go.

That being said, there are a few downsides. Hacking and technical glitches might affect trading. That’s why it’s wise to research on the market and the online cryptocurrency broker you wish to work with, before investing. Hence, it’s only wise that you keep your ears to the ground on the latest bitcoin and cryptocurrency updates to help you make the right choices.

In as much as both involve online trading of different forms of money, they enjoy certain similarities. The behavior, structure and size might differ but provide opportunities for investors to make profit.

To be sincere, Bitcoin and other cryptocurrencies have enjoyed an influx of active traders from the foreign exchange market over the years. But it’s also important to state that the resources you have, your capability of tolerating risks and your objectives as an investor also help you make the right decision.

3 Tips for Excelling in Your Niche

Puerto Rico Continues Along the Recovery Road After Hurricane Maria