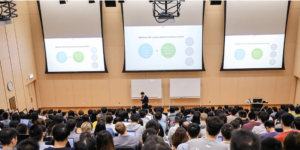 How can the business world and our life be impacted by the emergence of blockchain? Lei Chen, CEO of Xunlei and Onething Technologies, recently shared his views on the blockchain innovation with students from the Hong Kong University of Science and Technology (HKUST).

During the HKUST talk, Chen identified two technological forces currently transforming the ways we live and work – one that creates centralized business and one that empowers individuals. The internet and artificial intelligence has been concentrating the world’s wealth, resources and data into the hands of large corporations. Conversely, cloud services, the sharing economy model and blockchain are empowering individuals to be more productive and self-reliant.

Chen cited blockchain as a means to transform traditional business models because of its abilities to reduce barriers preventing individuals from starting their own business, and to improve profit distribution and sharing. What makes blockchain such a game-changing technology, he said, is its ability to return data ownership to individuals, instead of corporations.

“With blockchain, what happens is that every piece of data you create in the application belongs to you,” said Chen. “It creates a sharing economy that’s built on trust and consensus.”

Onething Technologies’ shared computing model is a typical example on how blockchain creates a real sharing economy, as shared during the talk. Users contribute their resources such as bandwidth and storage to the shared computing network – this is a transparent and traceable process backed by blockchain. Users are incentivized to join the shared platform by being offered LinkToken.

Chen wrapped his presentation with two key predictions on how blockchain will change the way we do business – it will create a more sustainable business model and ecosystem, and empower individuals who enjoy sharing its benefits and profits in a fair and secure way.

HKUST is ranked as the world’s best young university in Times Higher Education’s Young University Rankings 2018. The University has made its mark on the academic and tech industries for its research in the field of technological advancements such as big data and blockchain. HKUST is focused on partnering with leading companies in respective fields and therefore approached Chen to be a guest speaker because of Xunlei and Chen’s personal advancements in blockchain and cloud computing.

A renowned entrepreneur, Chen has been described by the Financial Times as theenforcer behind Xunlei’s pivoting into blockchain. Since joining Xunlei in 2014, Chen created and is leading an entirely new company under Xunlei called ‘Onething Technologies’ that is dedicated to innovation in blockchain and cloud computing.

Focusing on the underlying infrastructure, Chen led the Onething Technologies team to tackle a significant bottleneck in blockchain – performance and scalability. The launch of ThunderChain, which can handle millions of transactions per seconds, represents a beginning of new era to blockchain developers and entrepreneurs. It perfectly supports the adoption of blockchain in multiple scenarios beyond financial sector, such as supply chain, knowledge sharing, healthcare and philanthropy.

This shift – from download service provider to blockchain giant – has so far driven exceptional business growth for the company. According to Xunlei’s Q2 earning results, the company recorded US$66 million revenue, an over 70% year-on-year increase mainly driven by its cloud and blockchain business.

Due to innovation and contribution to cloud and blockchain industry, Chen was awarded China’s Most Influential People for Cloud Computing in 2014, Annual Luminaries in Internet Industry in 2015 and Most Influential People for CDN in 2016. In 2017, he won the prize of Annual Leader of Global Blockchain. He has been invited to speak at multiple global and regional conferences, including the Boao Forum for Asia Annual Conference and the Summer Davos.

Benefits of Getting a VPN Trial before purchasing it