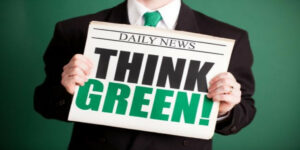 The economy is going at a pretty good pace. Actually, not just good- it’s going gangbusters. GDP grew by 2.2% in 2017, and in 2018 it grew by 2.9%- the largest growth since 2015! Your customers are happy, shipments are going out on time, jobs are getting done- and done well. There are plenty of reasons to celebrate- and the success of your small business is one of them!

It’s understandable that, in the midst of this economic success, the last thing on your mind would be to start stacking soup cans like one of those people on National Geographic’s Doomsday Preppers. And you probably shouldn’t be (though one can always use more soup, of course). Economists aren’t preaching doomsday anytime soon.

But at the same time, there are some steadily growing signs of oncoming economic uncertainty. A yield curve inversion, which means that long-term US government bonds become of a similar value to short-term bonds, is said by some forecasters to be the harbinger of recession. While this certainly isn’t always the case, a yield curve inversion occurred earlier this year, worrying investors. Perhaps profiting off of the fear, many media articles are already predicting doom.

Here you don’t have to worry about fear-mongering. But at the same time, you can, and should, always prepare for the worst, just in case. And one of the best ways to prepare is to start saving money.

Now, I’m not suggesting that you hack your budget up into little pieces, and I’m not suggesting that you stop paying extra for that caramel latte. But there are definite ways that you can save which you might not even be aware of. Being able to trim down your spending just a tad—or being able to further increase your profits—means more money in your main accounts. And THAT means more money you can transfer to a savings account, can go far in helping your business thrive even in tough times.

Below we’ll be discussing some of those paths to fiscal salvation:

So this may be self-evident at first. If you’re a small business owner you almost certainly have plans for Christmas sales or Independence Day. Why wouldn’t you?

But have you thought about other holidays? I’m not talking about smaller ones like President’s Day- I’m talking about Arbor Day, Leif Erikson Day, Super Tuesday, even Mole Day.

Why? It’s simple: there are millions upon millions of small businesses in the United States. And you want yours to stand out. While you can of course do this with things like vanity numbers, a great way to go about it otherwise is forming clever ad campaigns around smaller, “random” holidays. Events and sales around these will stick out to potential customers. They aren’t likely to be able to pick out one ad out of dozens they heard about President’s Day; how many ads do you think they’re hearing about Leif Erikson Day?

Now, to be clear, you’ll need some tact. Promotion over certain holidays, like national remembrances, can be a bit cringy if not done carefully. But if you pick a fun one, or one specific to your state/town, you can watch the customers roll in.

Yes, it’s possible that some of you may have rolled your eyes upon reading that. And we totally understand why- “Go green” is everywhere, from cars to politics to films to sports stadiums.

And, whether or not you care about the political aspect of it, the financial aspect is really worth looking into. Saving energy can lead to huge savings- giving going “green” a whole new meaning.

For example, computers eat up a huge amount of energy, especially if you have a decent amount of desktops at your office. But how often do you shut them down? Probably not often- even if the screen goes off, the computer is still running and still using power- which means it’s powering through your wallet. Why not have your employees completely shut down their computers before leaving? While it’s loading up the next morning they can go grab a coffee.

Similarly, some other ubiquitous stuff laying around the office can be costing you a fortune. Paper, for example. Yes, there’s been a big recycling drive for years now, but, in this increasingly digital world, why rely so much on paper in the first place? For example, a ream of paper costs about 8 bucks from Staples. Now, you might think to yourself, 8 bucks isn’t much. And that’s true! It isn’t.

But you don’t only use one ream of paper, do you? If you use even just one a month—way below average—you end up spending 100 bucks a year. That’s 100 dollars you won’t have later. If you use two, that becomes almost 200 bucks a year. Just one ream a week? Over 400 dollars a year. And if you find yourself using more than that, which many small businesses do, you could end up pushing four digits.

Going green avoids that issue entirely. Encourage customers to fill out online forms and change the rules to encourage your employees to do so too. Or try to print everything out on both sides of the page, which of course will cut your costs literally in half. You can even make “Print on both sides” the default print setting.o

This here is key. Oftentimes, once people start working with a phone system or other communications system, after a certain point they keep it, regardless of quality. Payments sort of just fall into the background; the direct deposit may leave your account without you even realizing it.

And what are you getting for that? Sometimes, not enough bang for all the buck you’re letting out of your wallet.

After all, that phone service you signed up with 10 years ago might be a bit out of date. Tech in the 21st century has moved forward at a blistering pace, and some virtual phone systems have been able to keep up.

One of those is MightyCall, a premier virtual phone system. They have a variety of plans—some starting at only $24 a month—and include things like automated call recording, an intuitive call flow system, the ability to purchase vanity and toll-free numbers, voice greetings, and tons more options.