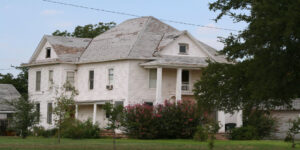 Old homes have a special charm and character that’s hard to find in modern homes. While they offer the chance to blend character with customization, old homes can also come with hidden problems that can be very costly in the long-run.

If you’re thinking of buying an old home, be on the lookout for signs of these seven common problems.

If your home was built in the 1920s or earlier, it may have balloon framing. Balloon framing is a cheaper alternative to traditional timber framing. Instead of using complicated joinery, this type of framing uses extra-long boards and nails.

The structure is surprisingly sound, but the framing’s design poses a serious fire risk. With gaps between the planks, fires from the crawl-space or basement can easily spread upstairs.

Clay pipes are extremely vulnerable to tree root damage because they’re brittle. At the time, plumbers would cobble shorter pipes together to form a line. Over time, these pipes can separate, leading to soil contamination and leaks.

Homes from the 1950s may have cast-iron sewer lines. Cast-iron was actually a popular material for sewer pipes until the 1980s.

These lines can easily corrode or crack over time, and it can cost thousands of dollars to repair.

A mainline camera inspection can help you determine the type of piping used in the home’s sewer line.

Homes that were built in the 1960s didn’t have too much of an emphasis on insulation. Preventing heat loss wasn’t much of an issue, as energy prices were cheap at the time.

Insulation is, fortunately, a relatively inexpensive issue to fix. You can rent an insulation blower form a local hardware store for less than $100 a day.

Uneven floors are common in old homes with foundation issues, but there may also be other subtle signs homeowners should be on the lookout for.

If windows and doors are sticking or not latching properly, there may be issues with the foundation. Drywall may crack, too, especially over doors and windows.

With an old home, it’s not uncommon to find hairline cracks in the concrete foundation. Normally, these tiny cracks aren’t an issue, but the only way to know for sure is to consult with a structural engineer.

Lead and asbestos are two serious concerns with older homes. Homes built before 1978 likely have lead paint on the walls and exterior. Lead was also used in plumbing systems before World War II.

Asbestos, a leading cause of mesothelioma, was used in insulation and fire-proofing material through the 1970s. Actions by the EPA banned most asbestos applications by the 1980s. Builders were never required to remove asbestos from homes, so homes built prior to the 1980s may have this hazardous material.

Termites can wreak havoc on a home, devouring its wood and wood-like components. Every home is vulnerable to these pests, particularly in the southern region of the United States. But older homes are more susceptible to an infestation due to foundation and drywall issues.

Termite damage can cause buckling or sagging floor as well as pinpoint holes in the drywall. Bubbling or peeling paint can also be a sign of termite damage as well as hollow-sounding wood supports.

If a home has signs of an infestation, a pest control professional must be brought in to eliminate the colony. Expect to spend anywhere between $1,000 and $4,000 to get rid of the problem.

Homes exposed to excessive moisture are likely to have mold and mildew issues. Mold is most common in the bathrooms and basements of homes in wet climates. Older homes are more susceptible to this issue because moisture can creep through leaky pipes and cracks in the foundation.

Mold infestation can start inside walls, so it’s not always visible when walking through a home.

Some mold is expected in homes, but when the problem gets out of control, it can exacerbate allergies and respiratory issues. Mold will also eat away at the surface it’s on, including drywall, wood and grout.

How to Stop Smoking Naturally Without Using Willpower?