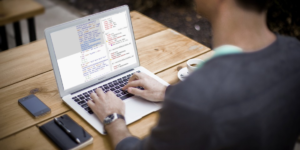 A lot of marketers might roll their eyes at the idea of learning how to code. It just seems like a foreign language, something complicated with a lot of math (hint: there’s not), their marketing brains just weren’t built for. In yet, we all consider it a lucrative field…and for marketers that learn just a little bit of it, they’ll be off to the races too.

To sell a product doesn’t just mean you understand what it does, but the in’s and out’s of how everything works. From start to finish, you can recite the basic core concepts and why they’re important. After all, would you really want to buy a car from someone that doesn’t know how gas gets to the engine?

The best salespeople will tell you that products don’t sell themselves, but how they’re made can. It transforms something from just an item to a story, giving it life. More, the knowledge base in learning the process will not only put you ahead in your area but also in keeping up with the latest and greatest.

With how cutthroat the marketing world can be, having the ability to code will put you near the cream of the crop. Not only will you be able to understand the tech behind something, but the passion and motivation to why it was built too. And with a knowledge base like that, prospects will be lining up at your doorstep.

In order to conversate, you have to speak the language

It tickles me to hear about marketing and coding teams butting heads. It’s always one side thinking that the other “doesn’t do much” and whatever it is they’re doing “should just work.” It’s a silly debate, especially considering one side feeds the other. However, (although not always accurate) everyone feels they have an understanding of how marketing works. But with code, the inexperienced look at it as a mind boggles.

As unfair as it seems, giving your perspective on how a product should work is respected much more when you have an understanding of how it’s built. Without it, your opinion is regarded as “a nice idea,” but usually isn’t considered much more beyond that. Granted, this isn’t exactly your fault but because literally everyone has an idea on how something new should work, but it can be much tougher to accept if you’re both working towards the same goal.

However, by coming in from day one with a knowledge base at hand, you’ll not only be respected more by the development team but be able to be on-boarded much quicker as well. This could additionally lead to the opportunity of being able to collaborate more frequently, as well as gain input on how the product is being developed. While it’s not quite the level of being able to hop in code reviews, absorbing what’s happening will put you eons ahead with sales.

A Person that Can Educate Can Sell

Think of this as the car dealer from above. While some may be able to show the bell’s and whistle’s like anyone else, the best ones can tell you about the intricate, mechanical details that make it what it is. This gives a consumer a sense that they’re learning something special (almost an inside knowledge), that evokes a feeling of loyalty.

By knowing how your product operates from a coding perspective, explaining it becomes tremendously easier. Not only will you be able to walk customers through how the product works step-by-step, but these skills can translate into revamping your communication efforts in general. Everything from your email to social media to even compiling pitch decks will be better. This is a unique hybrid role that when successful, is highly sought throughout the tech world, from start-ups all the way up to Fortune 500 firms.

Being able to code will always make you a more lucrative player to any tech firm. Why?

Because it means you can adapt easier, explain the process better, communicate with the team fluidly, and come up with ideas others may not have even considered. And whether you’re just a freelancer or even the prospective CMO, being a Michael Jordan of tech marketing will have you sailing past the competition in no time.

5 Ways Business Owners Can Save A Fortune On Taxes

A few years on: The futility of comparing Xbox One to PS4