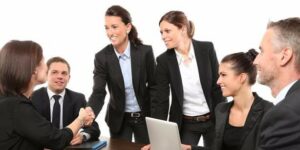 The reasons why companies generally record their conversations during meetings – especially the important ones – are quite easy to understand. After all, for such important meetings you need official proof of what has been said, what issues have been raised, and what the proposed (and agreed upon) solutions might have been. It’s almost a standard in any industry, and it’s good practice.

But there are many more reasons than those mentioned why you want a recording of a meeting, however – including a transcript of it. Having a good transcript of the recording can make a big difference in future endeavours. Here are the top reasons why more companies are recording their business meetings.

We don’t always remember things when we should – and recordings and transcriptions are a great help in this regard. We can easily go back to the recordings or transcript and find out where that great idea came from, or how a certain action plan got interrupted. Objections can be raised again in the future, and a consensus can be based on arguments that happened in the past.

When a certain meeting is recorded, the company has the choice to make it available to other people who were not initially invited to the meeting – or at least, it can provide certain people of interest with either the full transcription or a summary of it. This is a great way to provide open communication and to gather feedback from third parties if necessary.

When a meeting is concluded and decisions have been taken, you’ll need to consult your notes to see who exactly is going to do what in the future to accomplish exactly what goal. With recordings and transcriptions, this is an easy review.

Something special also happens when you are recording a meeting and when everyone understands that the meeting is recorded; everyone knows they’re on the record, and everyone has a tendency to put their best foot forward. If things are to go the way they should, it’s understood that everyone should have had plenty of time to prepare before the meeting and that everyone understands the meeting is in fact recorded – that’s only fair. But recording a meeting and having it transcribed by a good UK transcription company can make a very big difference. It’s a good habit for the company, and it’s a way of growing.