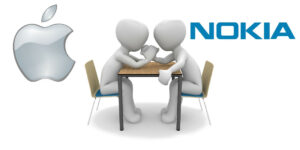 It had been quiet around Apple and Samsung with their numerous multi-million law cases over patent infringement. But now Nokia wants to enter the smartphone arena again and has decided to remind everyone that they were, and still are, a big name in technology development.

According to Nokia, since 2011 Apple has a licence for some of the company’s patents but is declining to acquire licences for other Nokia inventions it is using in its devices.

Like always, a bunch of Corps and Incs are quarreling in courts to see who invented the wheel first.