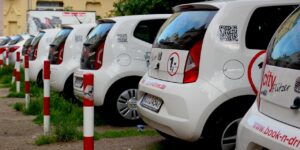 You can blame Uber but we are on what appears to be a long pivot to cars as a service (CaaS?  Because Automobiles as a Service would be rude). This is an interesting pivot because, if you think about it, for most of us owning a car is already stupid when you have services like Uber or Lyft that you can rely on and cost less.

Initially cars gave you freedom from questionable public transportation and limited cab coverage but with these car sharing services for around the same, or less, cost of buying and owning a car (when you factor in insurance, depreciation, gas, and parking) many of us can have someone pick us up and drop us off for far less.  When I was a kid only the rich could afford chauffeurs or a regular car service but now, we all basically can afford them.

Now these are point to point services, you pay for your specific ride, but we know with the advent of self-driving vehicles that we will get subscription services which will work more like a car loan or lease payment (without insurance).  Where you pay flat monthly fee based on average usage, quality of service (priority), and quality of average vehicle to have a shared vehicle at your beck and call.

Let’s talk about some of the other changes that are likely to result.

The most obvious coming change is the lack of a need for a garage.  Bargain homes often come with limited space for a car and high-end homes can have garages that are more like car parks.  But if you don’t need to own a car you don’t need to own a garage. A lot of folks are ahead of this curve because they have so much crap in their garage, they couldn’t get a car parked in it to save their lives.

Now, I expect, high end homes will continue to have garages as car ownership as a status symbol will be hard to overcome but they’ll just drive their cars less.  One area that isn’t addressed by the service is recreational vehicles both for use off road (and on the water or air) and to get to the venue where the vehicle will be used.

Right now, there really is no aspect of CaaS that is set up for pulling your personal off-road vehicle, boat, or personal aircraft so ownership of both the recreational vehicle(s) and what you’ll need to tow them will remain for the foreseeable future.  But the need to own a regular car will probably expire by mid next decade and the need for a garage will change as a result.

Particularly as we pivot to self-driving car services the need for traffic cops should drop dramatically.  These cars will not only be increasingly connected they will increasingly be required to be connected even when human driven.  This means that infractions can be more automatic and the only time you’ll need a police response is when the system is overridden, goes rogue, or is used in some hostile fashion (for instance a self-driving car bomb).

For these kinds of problems, which will be far more infrequent than today’s human driven vehicles generate, you’ll need a different kind of response.  For instance, if you suspect an autonomous car has been weaponized, you’ll want to disable it fast and, right now, there is no protocol or tool set to do that reliably.

Best guess is something like a fast response drone with EMP capability to disable the car rapidly without destroying it on top of a mandated kill code. The reason you’d need both is if the kill code was disabled by a technically competent attacker.

Now autonomous flying vehicles are a whole different problem because if you knock them out of the air you are going to have impressive collateral damage.  This suggests the ideal solution would likely be some kind of capture drone which would be far safer than the surface to air missiles we currently have to protect against hostile aircraft.

Most of the proposed coming truly autonomous cars are electric but they will likely be served by depots tied or under contract to the provider.  More like truck stops than your typical neighborhood stations they’ll be fewer of them, they’ll be larger, and they’ll largely be automated. Vehicles will arrive, get charged up (likely using something like WiTricity’s wireless charging system), and proceed to their next engagement at scale.

My expectation is that these depots will eventually handle both land based and flying autonomous vehicles so they can aggregate the high-powered stations and keep the build cost for the effort down.  This also means the end for those gas station stores because autonomous cars don’t need sodas or food.

Passengers will likely be eventually served by in car purchases and the cars stocked with certain food items.  Eventually you’ll likely be able to order drone delivered items from trucks that are constantly on the road providing this service.  Think of it kind of like a mini bar on steroids.

Depots will likely also be used for repairs vastly reducing the need for small local service shops.  At scale the firms that provide CaaS will need to have both mobile and centralized service capabilities.  We already know that other than software patches, electric cars need very little service (my first scheduled service for my electric Jaguar I-Pace was two years from when I first got the car).

So, both a vastly reduced need for service and the need to go to where the car is or gain the economies of scale for a central facility should make small service centers go the way of Blockbuster.  (Auto mechanic is likely not a good long-term career choice anymore).

Cars will be insured but the cost of insuring an autonomous car will not only drop dramatically only the service providers will need this insurance.   This means far fewer insurance offices and far lower insurance premium income and insurance payouts. The odds of having an accident go down dramatically with an autonomous car and, since you won’t own it, you won’t need that insurance anyway.   And most of the reasons we belonged to car clubs like the Automobile Association of America (AAA) will evaporate as well.

And, if car ownership and driving drop off a cliff how; interesting will car racing be?  I’m not saying it will go away but it may be replaced or updated to make it interesting again.  Currently flying vehicle racing looks to be trending, were you to add an AI to this it could be both safe and more exciting.

Cars as a Service will change a great deal of how we commute in the future and it isn’t the only thing that will get us out of owning a car.  Telepresence, flying autonomous vehicles, and drone delivery will all contrite to lowering our need to own a car. With this change in ownership, most of the existing car ecosystem will need to change from repair stations to gas stations, to small stores that serve drivers and we are likely only looking at the tip of the iceberg.

Once we add autonomous flying vehicles, we may not even need many of our roads and bridges anymore (which would be good because our transportation infrastructure is in pretty bad shape).   In the end this change will dramatically alter what we value in our homes (the need for a garage will drop sharply), what careers are going away (auto mechanic, gas station attendant etc.), and which industries will be dramatically changed (car sales, car insurance, law enforcement).

Finally, owning a non-autonomous car is going to be increasingly risky as the market for these older vehicles will drop into sharp decline potentially leaving you with a vehicle you neither want to use nor can easily sell.  Fortunately, we aren’t at this last place yet, but I think we are within a 10-year window when we will be. Oh, and finally, when you realize that these future vehicles are basically rolling computers the odds that Apple or Dell will eventually enter this market go up significantly putting all existing car companies at risk as well.  Isn’t change wonderful?

Something to noodle about over the weekend.

How To Scale Your Mobile App