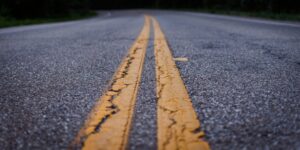 Whether we name them streets, avenues, ways, drives, lanes, routes or highways, roads are an essential component of our daily lives, and the backbone of national life. And even before the invention of the wheel, ancient people were widening and improving the surfaces of the paths they and their animals traveled by. Interestingly, the first formal ‘roadways’ would not have been on land, so to speak, but in the form of river and swamp crossings. Let’s take a look at how they started, and how we’ve come to make the types of roads we depend on so much today.

Before humans even walked the planet, animals have been following traditional migration paths and creating tracks over many generations. It’s thought that the first human-utilized trails probably followed these routes, and may have become formalized over time. One notable example of this type of route is the Icknield Way in England, which is thought to have been used by ancient Romans and by Iceni traders before them.

In what is now Iraq and was formerly Mesopotamia, stone paved streets that may originate from as far back as 4000 BC have been discovered, although it is, of course, impossible to verify their exact age. These would originally have formed routes in Babylon and were constructed by the Sumerians. It’s fascinating to note that these same builders were using bitumen (which we now produce as a byproduct of petroleum distillation) in their stone-laying activities – a technique which was forgotten about for centuries before we started using it again today in the construction of asphalt roads in Europe and America!

We know that between 2600 BC and 2200 BC, the ancient Egyptians were constructing paved roads, and that brick-paved streets were used in India as early as 3000 BC. And it was only recently in 2009 that a 6,000 year old track way in Plumstead, London was discovered.

The first great roads which connected different empires and nations were usually constructed under the auspices of kings and military leaders, either for trade or as routes to move their armies. One of the first such great roads was the Royal Road constructed for the Persian king Darius I the Great in 500 BC, which remained in use during Roman times, and extended as far as India.

The Roman Empire used stone to construct extremely strong and durable roads from 312 BC onwards in order to extend their military capabilities, including into North Africa. And at the height of their power, the Roman Empire’s road network covered an impressive 78,000 kilometers!

The route to the modern road

The foundation, if you will, of the modern road was laid by a Scottish man named John Metcalfe, who succeeded in developing many bridges and roadways during his lifetime despite being blinded at age 6! His technique involved starting with a layer of large stones to encourage drainage, a layer of finer road material, and a final layer of gravel on top.

Thomas Telford and John McAdam took this idea a little further, raising the center of the road foundation to encourage runoff to drain outwards. Telford also implemented a system that took gradient slopes, expected traffic volume and road alignment into consideration- and if that sounds familiar, it’s because we’re still using many of his ideas today! McAdam was involved with the first tar roads, laid in Paris. His technique, which used bitumen or tar as a binding agent, was nicknamed ‘Tarmacadam’ after him – and is where our word ‘tarmac’ comes from!

The present and future of roads

While the materials we use to construct our roads today may differ from country to country and depending on the road’s traffic load and purpose, the underlying technique has remained much the same as it was 19th century – but a new revolution may well be underway. Companies like PRS Geo-Technologies have demonstrated how stabilization of the underlying soil through the use of honeycomb-like “geocells” filled with local or recycled materials as infill can make roads much more durable, sustainable, and long-lasting – like the ancients.

Some countries are experimenting with the use of solar roads, where roads lined with photovoltaic cells could become giant solar panels providing electricity for the cars that use them. And while there’s still a lot of work to be done in making roads more sustainable and kinder to the environment, one thing’s for sure – it’s definitely going to be an interesting ride!

How A Life Coach Can Support Your Management Team

How To Take Your Gourmet Business To The Next Level