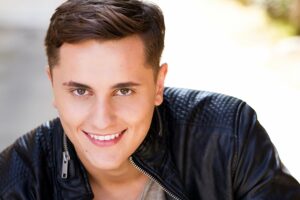 Over recent years, a lot of young talent has emerged in the world of TV and film. A number of younger people have taken the industry by storm with their creativity and their modern spin on the world of entertainment. One of these is the talented Pavel Slanina, who has made his mark with titles such as The Truth, Virgin Love Diaries, and The Forgiveness.

Prior to moving into the film industry and writing, Slanina was actually enjoying a professional football career. However, the calling of the film industry was too much and he decided to leave the world of professional sports to pursue a career that he was really interested in. Since then he has enjoy great success as an actor and writer.

With his multilingual skills, his passion, and his creative talent, it is little wonder that Slanina has made such an impact upon the industry. Having grown up in the beautiful Canary islands, the actor and writer developed a real flair for entertainment and writing from an early age. However, he also had a huge talent for football and spent twelve years as a footballer before moving on to pastures new.

His dashing good looks have no doubt helped to spur on his popularity with the ladies, and at over 6 feet tall he certainly cuts a dashing figure. However, the main focus is on his talent and there is certainly no shortage in that department. His acting in lead roles have shown off his talents to the world and even netted him awards. As an actor and writer, he is versatile, fresh, and unique, which makes him all the more popular.

After focusing on the same old acting and writing talent for years, the world is ready for fresh new talent in the world of entertainment. Slanina is one of a number of stars that have helped to bring this fresh, unique take to the industry. His performances have been described as exciting and edgy and he has won awards that have been given out in the past to big names on the Hollywood A star list.

Perfect for the entertainment industry

Based on his achievements and successes so far, the entertainment industry no doubt is the perfect place for Slanina to showcase his fine acting and writing skills. This means exciting times not only for the actor himself but also for viewers that will be able to enjoy his acting and writing. This is a young man that brings something fresh and new to the table, which is something that the industry has been waiting on for a long time.

He has also shown total diversity when it comes to both his acting and his writing, which is something that we do not see from all actors and professionals within the entertainment industry. With his passion for sports, writing, acting, and entertainment, this is definitely one talented person that the world will need to keep its eye on.

Aussies have woken up to alarming sleep stats.

That’s why more and more investors are joining Profitcoins . io