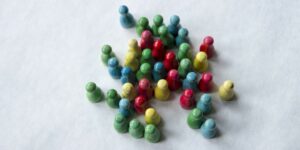 On Tuesday, some 3,000 entrepreneurs descended on Paris for France Digitale Day. The event, designed to bring technology investors and startups together, has reignited passionate debate about whether President Emmanuel Macron is succeeding in his mission of turning France into a “startup nation”.

Naysayers argue that there’s more rhetoric than results, and that London—not to mention Silicon Valley— still eclipses Paris’s efforts to get innovative companies off the ground. But statistics suggest Macron’s dream is taking shape, as an increasing number of companies are putting their roots down in the French capital. The next key challenge will be to see whether these firms can succeed on the global stage, and parlay early success into the much-coveted “unicorn” status.

Startup growth by the numbers

Supporting the idea that there’s more than just talk to France’s pro-business tilt is data indicating that Paris is churning out new businesses at the fastest rate since 2010. What’s more, despite the fact that Europe remains more risk-averse than the United States, venture capital fundraising for French startups surged from a paltry €448 million in 2014 to €2.8 billion in 2017. Paris also edged out London as the most attractive European city for investors for the first time in more than 10 years, according to a June 2018 EY report.

Some of these jumps might be attributable to concrete policy changes Macron’s administration has enacted, such as setting up a business-friendly flat 30 percent tax rate, proposing unemployment insurance for individuals who leave their jobs to start businesses and creating a state fund for investment in breakthrough technologies.

But Macron also has been personally lobbying for his vision, meeting with the leaders of major tech companies such as Facebook to promote France as a new and exciting playing field. That wooing seems to be paying off. IBM, for example, committed earlier this year to creating 1,800 jobs in France, while Google is also investing in AI and new personnel in Paris. Microsoft CEO Satya Nadella described France as being at the forefront of defining what the new technology era will mean to global society. Those big-name companies can support fledgling companies in the country and ensure that French entrepreneurs are rubbing elbows with some of the most influential people in the sector.

Budding startups are also likely encouraged by a growing list of success stories, such as French fintech company Qonto, whose efforts to replace professional bank accounts for small business and freelancers recently netted $23 million in funding from venture capitalists and the European Investment Bank. Armed with the new financing, Qonto plans to expand to Spain, Italy and Germany in 2019.

The real hurdle in the way

This sort of expansion overseas has remained elusive so far for many promising French startups. There are several reasons why French companies still struggle with taking the essential next step of scaling up their business model. While there’s plenty of money in Paris for early-stage companies, funding tends to dry up as companies mature; 12 out of 20 prominent industry leaders surveyed by The Innovator assert that French startups don’t have access to enough later-stage capital to gain critical scale and compete internationally. What’s more, leaders of successful French startups aren’t pouring that expertise into founding new ones, and the complexity inherent in the European market—different regulatory regimes, a patchwork of languages—makes it more difficult for French startups to grow compared to a homogenous market like the United States.

Despite these challenges, French companies are finding creative ways to make it. One case study is Wijet, a private-jet airline founded by serial entrepreneur Alexandre Azoulay. Since co founding it in 2009, Azoulay has constantly tweaked Wijet’s business model to help keep costs low and set the stage for the company’s eventual expansion. Through this continuous adjustment process, a small original market niche—a convenient, relatively affordable point-to-point private jet service—grew into a scalable business proposition in Europe.

Wijet concluded a partnership with Air France in 2014 to offer the French flagship carrier’s business aviation services, gaining access to a far broader customer base. It took a leaf out of Blablacar’s—one of the most successful French startups—book by setting up a ride-sharing scheme for private flights. These two changes assured Wijet’s attractiveness to clients; in the last few months, Azoualy led another overhaul of the company’s business model—shifting away from being a full-service airline, shutting down non profitable subsidiaries and outsourcing the operation of its aircraft to third party companies—,which is intended to ensure its scalability in the coming years.

And then there’s Algolia, a search-as-a-service company, which, recognizing that English has become a global business language, opted to implement English as its working language from day one and opened offices in San Francisco, New York and Atlanta in additional to its original Paris headquarters. Algolia complemented this global-from-the-beginning ideology with a broad commitment to planning ahead and building the infrastructure to be able to handle ten times their current business.

France has plenty of budding entrepreneurs willing to follow Wijet and Algolia’s example. One survey indicated that more than half of French citizens said they’d start a company if they had the chance, while a December 2017 report by Ipsos ranked France as the most innovative country in Europe—and third in the world. There is tremendous momentum in France to provide genuine support to a wide range of new companies, particularly within the technology industry.

While the foundation has been laid for Macron to meet his goal, if France hopes to one day rival Silicon Valley in a long-term, sustainable way, the country must take the next step and address the need for resources at every stage of the business development process. This requires a wide scale mindset shift toward globalization. If France can begin to see this larger picture and become a scale-up nation rather than just supporting seeds, France will be truly competitive and influential on the world stage.

How to Prevent Your ISP from Monitoring Your Internet Activities