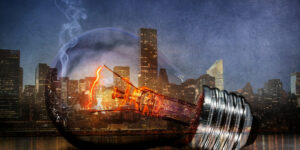 When most people think “startup,” they’re thinking of apps, gadgets, and websites that make our lives a little easier. Information technology is such a rapidly developing industry that it seems as if somebody is revolutionizing it almost every day. But if we think back to the products that we use on a daily basis, one of the first things to come to mind is energy. Most of the technology we use to produce energy was developed decades ago. Today, some high-tech startups are using the latest technology to change the way we generate and consume power.

Biomass Generators
The Robert Moses Niagara Hydroelectric dam is one of the largest eco-friendly sources of power in New York, but a new technology has recently proven itself to be just as effective. Biomass Generators use an incredible new technology that can turn waste into power. These generators work by releasing special bacteria into wastewater. These bacteria feed on the organic material found in the water and release a natural gas such as methane. Advanced computers are able to keep track of the chemical makeup of the water, controlling elements such as temperature and water-cut to make the process efficient. The gas can be burned in generators, and the resulting water is clean. Not only are we generating electricity efficiently, but we’re cleaning up the environment while we’re at it!

Solar Power
Solar power has been around for a long time, but New York startup EMPOWERED has developed a way to make this power more affordable. Building owners can install solar power on their roofs, supplementing their power use. But solar isn’t just for individuals, the city will soon be producing it on a large scale. Energy supplier Josco Energy recently release a report detailing where they get their power. Over the next few years, they’ll soon have access to over 50 billion BTUs of solar power that will be added to the existing grid.

Decentralization
Before technology had caught up to consumer needs, the electricity market was heavily centralized. The producers created it, maintained the infrastructure, and billed consumers for their individual power consumption. Today, technology has allowed this market to become decentralized. We’ve got advanced meters that can measure users use and contribution to the power grid. Homes that are outfitted with alternative methods of generating power can send excess electricity back into the grid to be used by others and tap into the grid when their demands aren’t being met.

Supercapacitors
The biggest problem facing the power grid is the fact that our use isn’t evenly distributed throughout the day. On a hot summer’s day, power users spike in the early afternoon when everyone cranks up the AC. This forces the city to rely on natural gas generators and other methods of production that aren’t very eco-friendly. Supercapacitors are able to directly address this problem. They are capable of storing very large amounts of electricity, making it available when necessary. This serves two purposes. Solar and wind generators can operate at maximum efficiency at all times, dumping excess power into the supercapacitors. They’ll also be used to smooth out power use between peak times by storing electricity during periods of low use, and making it available during peak times.

Edit Literally Anything With These 4 Tools