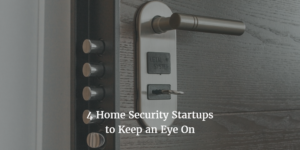 While this model has worked for many years, home security startups with more focused product lines are now proving quite successful at challenging the traditional model of home security. The advantage of this new model is simple: not everyone wants or needs everything a full home security system can offer, and these startups are offering choices that put control back in the consumers’ hands.

Additionally, smaller companies have an easier time adapting to the rapid pace of change in tech-related industries, and they tend to focus on doing one or two things extremely well—rather than trying to do everything for everyone like larger companies do. Individually, these startups are succeeding, and cumulatively, they are threatening the traditional home security industry model.

“You can really see these changes over the last year,” says David DeMille, home security expert with A Secure Life. “More companies than ever are unbundling services, reducing prices, and introducing smart features and integrations with third-party gadgets like Amazon Echo.” Situations like these are always great for the consumer—they force a shakeup of outdated models and prevent larger corporations from getting too entrenched and stale.

Home security startups are continuing to receive a lot of funding from venture capitalists eager to disrupt the industry. While there are dozens of such startups, these four are some of the best. Each has received over $40 million in equity funding and has seen success in their target market.

Ring produces a slick smart doorbell system that incorporates a camera and internet connectivity to allow you to see who’s at the door anytime, anywhere. Edward Chester of Trusted Reviews says it is “among the most well integrated and easy to use” video doorbells out there.

The company’s premise is that by incorporating the doorbell with cameras, you can create a “Ring of Security” around your home. It may not sound like much, but this small company is providing a DIY option that directly challenges the need for a traditional security monitoring service.

Simplisafe attempts to streamline the traditional home security process for consumers by removing the contracts and middlemen that often bog down big security companies. Simplisafe promises to streamline your bill as well, offering the same protections and services as the big guys at a fraction of the price.

In fact, it claims you can save nearly $2,000 over three years compared to competitors. The installation process is DIY and takes less than an hour, according to the company. The whole system is wireless, and it arrives at your door preprogrammed and ready to go. It also offers award-winning professional monitoring for around $15 per month, compared to the $30-$50 often charged by the big names.

August Home produces smart door locks and doorbells that take advantage of all the conveniences offered by modern smart home technology. The August Smart Lock is an especially cool little device. Not only can you control it with a smartphone app, it also can automatically lock and unlock your door as you approach.

The company’s product line is relatively small—it sells a smart lock and a smart doorbell, along with a few other accessories— but it’s a great example of a company that has focused on doing just one or two things extremely well, rather than trying to be everything.

Canary offers a unique alternative to big alarm systems, which require drilling into walls to install cameras and expensive monitoring services. The standard Canary system is a combination of wide-angle camera, alarm system, and air monitor that requires no installation and almost no set up. Simply set it where you want it, connect it to your home Wi-Fi, and you’re done.

When the system detects something is up, you get a notification on your phone. You can then sound the 90-decibel alarm or have the system automatically call local emergency services. Canary also offers the Canary Flex, an indoor/outdoor security camera that is both weatherproof and wireless.

With dozens more startups currently active and receiving funding, their future in the home security space is looking brighter than ever. And with the change and innovation they’re driving throughout the industry, we’re all going to benefit. What do you think the future of home security startups looks like?