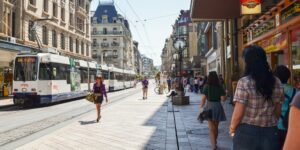 Switzerland was named the most innovative country in 2017 in the Global Innovation Index. It was the seventh consecutive year when Switzerland topped this index which shows that the Swiss business environment provides the best framework for growing newly-established businesses and to transform valuable resources into innovations. Here are other important reasons to incorporate in Switzerland which entrepreneurs and companies should take into consideration.

Switzerland is a safe haven

The high level of political stability ensured through the consensual form of government, in which the Swiss electorate is heavily involved in all important decisions, sets ups the basis for a business –friendly regulatory environment and a transparent and fair legal system. More than 2,000 global corporations have decided to incorporate in Switzerland and have established their headquarters in the country, including some of the world’s leading multinationals. In return, the involvement and contributions made by all these big players to Switzerland’s economic system strengthen it even further.

In addition, the Swiss franc is one of the strongest and most stable currencies in the world, even during turbulent times such as the Eurozone debt crisis that has affected many of Switzerland’s neighbors since 2009. Switzerland’s policymakers are very prudent when it comes to financial measures and have been able to fight efficiently against inflation, which makes Switzerland seem like a safe haven during critical times, in comparison to other economies.

Switzerland offers many advantages for cutting-edge companies and exciting start-ups, such as highly skilled and educated workforce, a highly developed IT industry sector and excellent research and development policies and programs, supported by world-leading companies activating in the engineering and pharmaceutical sectors.

Not only is this a great reason to incorporate in Switzerland, but it’s also worth mentioning that the country is a very good testing ground for the introduction of new technologies and innovations. For example, Switzerland was one of the first countries in the world to accept payment made in cryptocurrencies and to establish regulations for ICOs supporting the blockchain technology.

Swiss cantons have a certain degree of autonomy, which means that they can establish their own tax rates and regulations that apply only on cantonal level. Thus, each Swiss canton has developed certain strategies and provides tax incentives in the form of significant tax deductions or in certain cases tax exemptions to attract foreign investors to incorporate in Switzerland.

The internal competitiveness between cantons offers many benefits for foreign companies and entrepreneurs, who want to establish a business in Switzerland, but it also provides and outward-looking heritage of international trade.

For instance, in these last couple of years, Zug was the most competitive canton in Switzerland, followed by Zurich and Basel-City. The canton’s ability to innovate has increased its long-term growth potential, even though it’s not as big as other Swiss economic centers, that have only partly transferred their innovative strength into productivity growth.

Switzerland has become somewhat of a commercial crossroad due to its strategic location right in the heart of Europe, serving as a gateway to important European markets. The highly developed infrastructure facilitates trade activities between some of Europe’s largest economies and has helped Switzerland become an important logistic hub. This important advantage is something that should be considered by those who want to incorporate in Switzerland by establishing company head offices and logistic offices in the country pursuing commercial activities on European markets.

Switzerland offers many other important advantages, such as skilled and multilingual workforce, liberal tax system and labor market, the status of one of the world’s most important financial centers and high quality of life. Especially foreign investors who want to incorporate in Switzerland and establish their business presence in the country should rely on the help of a specialized firm in company formation procedures and legal requirements to open a Swiss company as fast and hassle-free as possible.

How to do Whatsapp Marketing? Data, Examples, and Tips