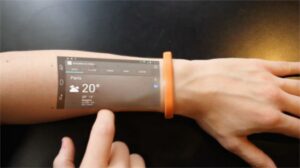 The video of a smartphone on, or under, your skin has been going around social media for quite a while. At first I thought it was a hoax, a video made by some young creatives for a school project or something. The project is real and to my surprise still active.

The bracelets Idiegogo page is down and they have a warning on their homepage that preorders are not open, so don’t trust any fake campaigns. The founders, four Frenchmen with  backgrounds in technology and marketing, are trying to raise money (nearly $1 million) to cover development and legal costs. They pledge to start mass production and deliver towards the end of 2015 or the beginning of 2016, once they have the project financed. The bracelets will cost between $199 to $399 depending on specs.

The first video  was very ambitious, showing more  what they would like to achieve that what is possible. There is going to be a lot of technic stuffed  in to this new wearable (as shown in the graph below), I have doubts if they can fit in a battery with sufficient capacity.

But a video showing the first working prototype is promising.

Showing notifications and allowing interactions with your phone, would be a good start, enough to justify a crowdfunding campaign. Hopefully they can deliver on time, I wouldn’t mind having a cicret under the christmas tree.