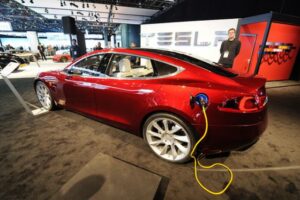 I was reading a story this morning on Tesla S Body Kits which concluded that while they make the car look better/faster they actually reduce performance.   The performance the author was talking about was range.  Because that is the performance you are concerned about in an electric not 0-60, or top speed, it is range (because chargers are still not very prevalent and it typically takes a lot of time to fully charge an electric car particularly one like the Tesla with a massive battery).

Yet when you see some of the promotional videos for the Tesla (Insane mode for instance) the focus isn’t on range but on 0-60 performance just like a gas car and the fact the Tesla, particularly the performance versions, will dust most performance gas cars 0-60.  And I have to admit that acceleration is a ton of fun but you’d never take one on a race track because it would likely drop into limp home mode or just stop after one lap.  The problem isn’t the motor it is the limitation of the battery and if you buy a Tesla and don’t get this you are likely to buy the wrong version of the car and look stupid.

And who wants to pay over $100K to look stupid?  Let me explain.

Elon Musk recognized that bringing out a cheap electric car wouldn’t work because the ecosystem just isn’t yet there for electrics so you’d end up with something like the Nissan Leaf that underperforms cars half its price in all areas except gas cost.  This is a car you can’t make money on because you are selling to people that are excessively focused on cost (not a great place to be if you need high margins to build out an ecosystem).  And an electric car company has to take the lead in building out an ecosystem (which Musk is doing).

So he came out with an electric that could go head to head with luxury gas cars and targeted people who buy luxury cars.  They are buying into the status of being green but don’t care that much about saving money.

However typical status cars are often high performance as well and the Tesla is designed to be fast however fast cars tend to have lots of racy looking spoilers and fittings that are designed for track use even if owners virtually never track these cars.

Now on a gas car that at least could go on the track that may make some kind of sense but on an electric they make no sense at all because they tend to cut range in exchange for downforce and given no one in their right mind would ever track a Tesla there isn’t even a theoretical upside to this stuff.  But these things still define a performance car and the performance versions of the Tesla really look pretty lame as a result even though, with an electric, they look just as they should.

So unless you are dusting a lot of Mustangs etc. at stoplights (not a good idea given what this does to the range) as a high end Tesla buyer you don’t get the extra status bump except maybe from other Tesla buyers and the smart ones of those likely think you’re an idiot.  You paid more for a car with less range than the one they got and range is king on an electric.

The right solution for a buyer is to recognize that high performance in an electric is all about range and instead of buying the one with the big motors buy the vastly cheaper one with the smaller motors.   Interestingly enough, in this case, the better car is actually the cheaper car because it is range not 0-60 times that should differentiate electric cars from each other.  But while this is the smart path, it isn’t the obviously one because we connect price and performance (speed) to status thanks to our long love of electrics.

In effect every smart Tesla buyers who buys the base model knows in their head that the folks buying the more expensive versions (with the bigger motors) are idiots because performance electric is supposed to be about range and not acceleration.  Making idiots out of your most generous customers is likely not a great long term business plan so figuring out a future line that doesn’t do that would be exceedingly wise.

So, I think, the real fix is to have a unique high performance Tesla halo car at the top of their line for those that truly chase performance and maybe have it be based on hydrogen or some other clean technology that will actually work on a track.  Let the Tesla Sedans be defined not by power but by levels of luxury with the most exotic finishes and richest interior, and exterior, appointments pushed to the top of the line.

Right now the smart Tesla buyer should likely favor the lowest cost all-wheel-drive configuration (70 D) with the largest battery.  That gives you the best match of utility and range.  I should point out that this car is still faster than my performance Jaguar XKR was when it was first shipped at around 5.2 seconds to 60.  Performance drivers should likely stick with performance brands which do have some incredibly fast hybrids on the market but until we solve the battery problem an electric high performance car is just stupid.   And who wants to pay $100K + to look stupid?

By the way, I’d advise you not to race a Tesla with your new performance car, you’ll likely get dusted and that’s yet one more way they can make a performance car driver look stupid.  (Here is a video of a Tesla S going against an Nissan GTR, another car you don’t want to race, and off the line the Tesla takes the GTR, eventually the GTR catches it but that’s longer than you’ll typically get).  The P 85 D it’s a beast.

And to put my money where my mouth is I plan to pick up a Tesla X next year with the same configuration I’m suggesting for the Sedan.  I don’t want to look stupid either but damned if I don’t love those Gull winged doors (and I need something that’ll love snow).  And with the X I won’t be tempted to buy a body kit.

Batman Vs Superman Trailer Is Here