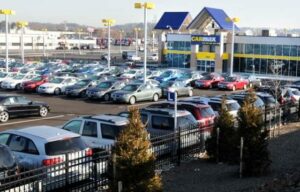 A total of 11 non-profit consumer organizations have sumbited a petition to the Federal Trade Commission (FTC) against what they say are “deceptive advertising and sales practices” by CarMax “which endanger the lives of their customers, their families,other passengers, and everyone who shares the roads.”

You may recognize CarMax from your local Auto Mall and the many ads on television. It is the US’ largest retailer of used vehicles. The ads for CarMax tout the “CarMax QualityCertified” which claims that every CarMax used car has gone through a rigorous “125+ point inspection.”

According the aggrieved consumer organizations who have signed on to the petition the ads and CarMax’s claims are deceptive and misleading.

Among the more egregious claims by CarMax that are under review are the following:

While most of us have a deep distrust of the archetypal used car salesman, often the butt of jokes and innuendo, CarMax has been pretty successful with its business model selling over 4 million used cars.

The gist of the problem is that CarMax is selling cars that are knowingly defective and may be subject to recall and that CarMax cannot be stopped from doing so by the National Traffic and Motor Vehicle Safety Administration (NHTSA), which lacks the power, therefore it is up to the FTC to regulate the matter.

Under the National Traffic and Motor Vehicle Safety Act, auto manufacturers are mandated to recall vehicles that either 1) fail to meet a Federal Motor Vehicle Safety Standard, or 2) otherwise pose an “unreasonable risk” to safety. Most safety recalls fall within the second category. According to NHTSA, examples of defects that lead to safety recalls include faulty steering, brakes that fail, components that catch on fire, air bags that fail to inflate when needed in a crash, accelerators that stick, stalling in traffic, wheels that fall off, or axles that break.

Federal safety recalls are aimed at addressing serious safety defects, not defects unrelated to safety, “service campaigns,” or emissions recalls. If a manufacturer believes that a recall is not justified, it can petition NHTSA not to require a recall or contest the issue in court. Typically, the manufacturers agree with NHTSA that the vehicles are unsafe and should be recalled, and “voluntarily” comply with the federal mandate.

Qwerkywriter blast from the past keyboard