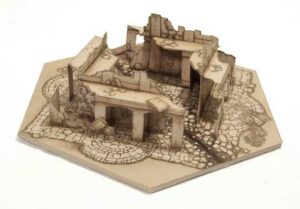 The idea is fiendishly simple. The company prints the terrains on 110 pound cardstock sheets, you cut out the sections and glue them to a base made from two pieces of foam board or cardboard (access to online video instructions and detailed assembly instructions are included). When you unfold your creation a miniature role playing game setting pops up in three dimensions just like a child’s pop-up picture book.

From there you can play your little dwarven hearts out. When you are finished vanquishing the beasties and collecting all the booty, you can just fold them up and store them away ready for the next adventure.

The company says that they are built to hold most miniature action figures without collapsing (two resin trolls and six pewter dwarves, in case you’re interested). When assembled each hexagonal pop-up setting measures 12” across (14” from farthest corner to farthest corner).

Currently the company has five different settings including a graveyard, ruins, gazebo, engineworks and outpost but they are already working on settings that include things like a Viking village, a fish shack, hedge rows, a rocky field, a forest and an adventuring gear depot.

If none of this makes any sense whatsoever then you obviously aren’t an RPG or D&D enthusiast, but for those of us who have wasted countless hours deep in the bowls of some haunted castle ruins searching for magic objects and treasure troves while trying to avoid being eaten by all sorts of Tolkienesk monsters these little kits seem like the best idea since 20-sided dice were invented. (Okay, yes, I was one of those geeks.)

The company hasn’t stated what the retail prices will be when they finally start shipping in September but for a Kickstarter pledge of $32 you get the complete set of five settings. The company has already surpassed its original goal of $3,000 by raising over $18,000 but their stretch goal is $22,500.

You can find the company’s Kisckstarter page here.