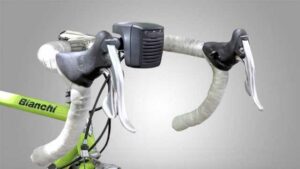 If you ever thought your bicycle bell was a bit wimpy and needed more punch then the MYBELL Kickstarter project might be just the thing for you. MYBELL is a digital bicycle bell on steroids.

The somewhat retro looking MYBELL box straps onto your handlebars and can be programmed to play back two different sounds (or even tunes) at a screaming 96 decibels. It also contains a bank of 110 lumen LED lights that can be programmed to flash different patterns (the company founders particularly like the back and forth pattern that imitates the lights on the Knight Rider car Kitt).

Not surprisingly the founders of the company came up with the idea after crashing their bikes because people either didn’t hear or chose to ignore the little ‘ching-ching’ of a traditional bike’s bell. They wanted to create a device that could blast a warning that no one could ignore. Thus, MYBELL was born.

The device will come with two pre-installed sounds and a number of pre-installed LED patterns, but users can customize the sounds and patterns to whatever they want – sirens, tunes or even samples ‘Get the BEEP out of the way!’

The MYBELL device is 2.55” x 3.17” x 3.28” (WHD) and weighs 0.49 pounds. It will ship in black but there are colored varieties for Kickstarter contributors. The company expects to begin shipping the device early in 2015 and have not listed a final retail price although it is expected to sell for something above $100.

The company is trying to raise $90,000 on Kickstarter over the next 39 days and they’ve raised nearly $8,500 toward that goal. You can find their Kickstarter page here.

HTC Butterfly 2 is heading to Taiwan