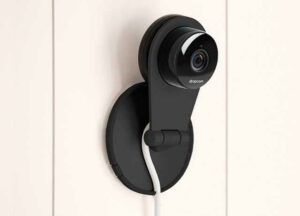 This past weekend Google’s Nest, makers of smart thermostats and smoke/carbon monoxide detectors, announced they will be buying the home video security company Dropcam for $550 million.

Dropcam’s home security products include WiFi-enabled cameras with night vision and zoom capabilities, cameras fitted with microphones for two-way communications, devices designed to monitor doors and windows, cloud storage for up to a month’s worth of recording and apps that enable users to automate their in-home surveillance systems.

Greg Duff, CEO of Dropcam, said he and Aamir Virani, the company’s COO, said the deal with Nest fits into what the pair had envisioned when they first started the company.

“Nest and Dropcam are kindred spirits — both were born out of frustration with outdated, complicated products that do the opposite of making life better,” stated Duff. “After numerous conversations with Nest founders Tony and Matt, it was clear we shared a similar vision. Nest cares as much about customers, privacy and product experiences as we do. Our products and technologies are a natural fit and by joining up with Nest we can fully realize our vision.”

While specifics of the deal have not been released it is believed that Dropcam will be reporting to, and working with Nest rather than Google. For now the Dropcam products will continue to be sold through their normal channels.

It was only a matter of time before Google would begin bringing more and more home automation products into their portfolio. Google’s $3.6 billion acquisition of Nest showed that they were interested in establishing a foothold in the rapidly growing ‘smart home’ marketplace.

Now that Google has two companies that are shipping real products that actually work they definitely have an edge over companies like Apple who are just entering the market with concepts rather than products.

Traditional curricula may be too linear for modern education

MYBELL ups the decibels and adds flash to bikes