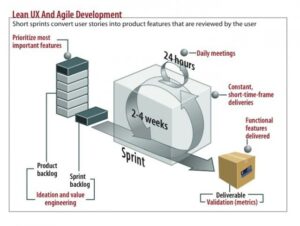 Software developers and engineers are increasingly adopting Agile methodologies. And why shouldn’t they? Agile workflows allows the makers of software to be in constant dialogue with the users of their software.

Focused on small teams working in short, regular cycles, developers should be able to ultimately adapt and meet the expectations of their users in more responsive and accurate method.

According to Jeff Gothelf, designer, author, international speaker and leading voice on the topic of Lean UX, the traditional approach to user experience (UX) design is often slow and inefficient. He calls for a shift towards a more Agile workflow, in line with the approach that software development and engineering teams are increasingly adopting. Part of this involves what he calls an “evidence-based decision making process”, that weighs design choices against real user feedback. He explains how success in a Lean UX approach should be based on achieving a change in customer behaviour. They may spend more time viewing material, or share more content, for example. The ultimate goal is to build a product that truly delights users.

Software now allows designers to be in continuous dialogue with their customers. The aim, Sacha Sedriks, creative director, BBC Future Media UX&D, says is to operate more “iteratively”, releasing in regular cycles to avoid a long, drawn-out process, and take advantage of this. He explains how the BBC user experience and design (UX&D) team adopted some of the principles of Lean UX when building BBC Playlister. By taking some of the existing functionality within the BBC site, the team were able, early on, to explore how they might incorporate adding tracks to a user’s playlist.