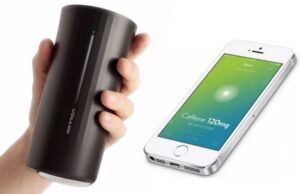 The Verge got a hold of a Vessyl prototype and it seems to work. It looks a thermos flask but can tell the difference between sode, flavored water and can even tell you whether you are drinking strong or weak coffee. Probably more importantly it should be able to measure calories, protein and fat content and other nutritional values. It is supposed to ship in 2015 for $199.99 but pre-order it for $99 now if you are so inclined.

You have to be a serious drinker to want to spend that kind of money on a cup. But, it is the Internet of Things (IoT) so, we better get used to it.

As a biomedical computing student at Queen’s University seven years ago, Justin Lee knew he wanted to build his own “internet of things” device — but he didn’t want it to be any old “smart” lamp, toaster, or light switch. “I wanted to put a computer into one of the most ubiquitous objects in the history of the human race,” he says. He chose the cup. Then, he enlisted Yves Béhar, the esteemed designer behind Jawbone and the OLPC, to build it. The result is Vessyl, a 13-ounce cup that recognizes any beverage you pour into it, displays its nutritional content, and syncs all your drinking habits to your smartphone.

Don’t hook up your toilet to the Internet