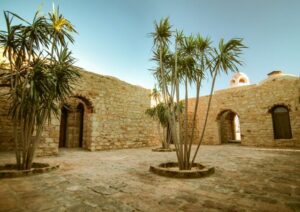 As part of a report on the global youth enemployment crisis, Generation TBD, the authors have examined the situation in Eqypt post-revolution. Food shortages, power cuts, and chronic unemployment are a part of the realities of day to day life in Eqypt for young people but there is a thriving community of entpreneurs who see a brighter future, one that they are making for themselves.u

Ahmad Zahran, the CEO of Karm Solar, is building a new kind of village in the desert, one immune to the ravages of the unpredictable and unreliable Eqyptian power grid. Power outages are occuring regularly in the capital, Cairo, but not in Karm Solar. In addition, Zahran is building a sustainable village for 500 local farm and construction workers, a village made with local earthen materials and relying on solar power reducing the cost of building by 40%.

Zahran gave up his job in a multinational company to become an entrepreneur and while he makes a lot less money now, he is happier and succeeding on less than he had before while creating value for his people. The original article is part of a series and deserves some attention. As for Eqypt, Zahran’s story is not the only one of enterprise.

Painfully aware of Egypt’s marginalized community of farmers, Laura Tabet co-founded, ‘Nawaya’ — or ‘Seeds’ — based in Giza, southern Cairo. Tabet lost her job a few months after the 2011 uprisings and, inspired by the promise of the revolution, she teamed up with two other entrepreneurs to start an educational center that introduces new agricultural techniques, bringing together volunteers from different competencies.

“Our aim is to empower farmers to overcome their own challenges instead of blaming the government,” she noted. It’s the kind of mentality that Egyptian entrepreneurs working on internet, energy, agriculture and other fields all seem to share.

Egypt is hoping for a thriving Silicon Valley, one that might be the only the salvation for its current unemployment crisis and a looming economic nightmare. Those entrepreneurs are pushing against barriers of bureaucracy, corruption and shortage of funds. And their work might be one of the few silver linings left behind by a stormy “Arab Spring.”

Menstruation app has raised over $45 million in funding

Edyn wants to help you grow

Preventing Access from Competitors Using Proxy: How it Plays out in 2021