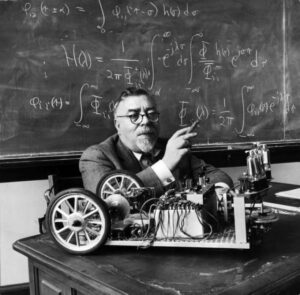 The lean startup can trace its roots in history according to an article by Jeff Sussna, Founder and Principal of Ingineering.IT.

Sussna sees things like lean startup, Agile development, and continuous development as successors to cybernetics. Cybernetics itself dates back to the 1950s and was influential in a number of disciplines before falling out of favor.

During World War II, Norbert Wiener worked with the US military to try to develop automatic targeting for turret guns on battleships. The idea was to use knowledge about physics, airplane design, and pilots’ cognitive processes to accurately predict an attacking plane’s flight path quickly enough to be able to shoot it down. Wiener’s research confronted him with two problems. First, it wasn’t possible to perfectly model the path of a human-guided physical object through physical space. Second, even if that were feasible, it still wasn’t possible to perfectly aim a large, heavy gun barrel. Depending on environmental parameters such as air temperature and humidity, and even the age of the grease in the gun turret’s ball bearings, the barrel might swing a little too far, or not quite far enough.

Wiener compensated for these unavoidable inaccuracies by building a feedback mechanism into the targeting system. It fed information about the gap between the intended and actual aim, and the predicted and actual flight path, back into the targeting system. Rather than just guessing the plane’s future location as best it could, then pointing and firing as best it could, the system successively approximated the desired aim, correcting itself along the way.

It’s a good read and provides some interesting insight on how the lean startup owes its origins to pioneering work done many decades ago.