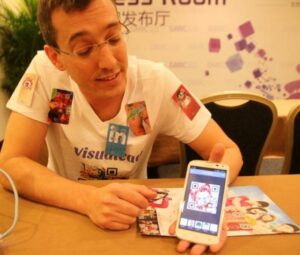 Quick Response Codes (QR codes) – those funny pictures on products that you can scan with your phone to take you to the company’s website – have been popping up on just about everything these days. And judging by the response that startup company VisualLead has generated in China with their new personalized version of QR code generation we’ll be seeing more of them in the future. Only now we’ll see them on web pages.

The service allows any user to create a personal QR code linking to his or her account using a picture. And it doesn’t stop there. The system can also embed the QR information in videos or GIF-style animations.

According to an article posted on Tech in Asia written by Paul Bischoff the Israel-based QR code generation startup VisualLead recently won the G-Startup competition at Beijing’s biggest tech event, the Global Mobile Internet Conference (GMIC). And now VisualLead has just sealed a deal with Renren, China’s Facebook-like social network, to allow any user to create a personal QR code linking to his or her account using a picture.

According to the article, “VisualLead’s CPO Oded Israeli told us the company can barely keep up with the demand for their service, which allows any person or company to place less-intrusive and better-looking QR codes into virtually any image.”

The company has already partnered to make campaigns with Ctrip, TouchMedia, Citizen, and Crocs in China and the company says they are in talks with both Tencent and Weibo to make it onto their respective platforms.

The article also mentions that a number of QR code companies in China have already tried to reverse engineer the system but had to give up and resort to the old-fashioned ‘sign an agreement with the company’ approach.

“Two of the biggest QR code companies in China called us up and said, ‘We tried to copy you, but we couldn’t for six months, so now we [will try] cooperation instead,’” said Israeli. He goes on to explain that the technology behind their QR code generation isn’t easy to duplicate. “The beauty is that it looks simple, but actually it’s not,” he says. “You have to know how coding works, how cameras work, and how image processing works.”

Score one for the innovators.

It’s interesting to note that the article asserts that the market for QR codes is exploding in China and other far-east countries. We’ll have to wait and see if it explodes in the rest of the world too. If that happens then we’re hoping that VisualLead will claim their share of the market.

You can read the original post (and see more examples) here.

What businesses want from mobile