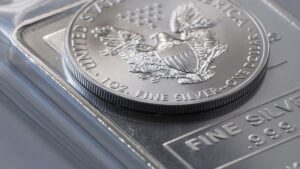 A general rule for silver and gold is that both precious metals follow cyclical patterns observed by watching the calendar. Simply put, silver and gold tend to peak in April before trending downward from there. This annual cycle suggests that silver has already peaked, or will do so very soon. But is the cycle applicable this year?

As of 26 April (2017), future silvers were up just over 9% while gold was up closer to 10%. Just two days earlier, silver was up more than 10% year-on-year. But does a two-day downward trend reflect reality? That depends on who you ask.

If you believe that the precious metal slide of silver will catch up to base metals and eventually be the dominant force moving forward, you are likely to feel that silver is on its way down. But if you are prone to believe base metals will stay up front, you might be getting ready to buy silver in May and June.

Precious vs. Base Metals

Silver and gold’s annual cycle, as price charts show, is the direct result of higher demand for precious metals between December and April. More silver and gold are needed to meet the demands of jewelry makers and other precious metal users during the first quarter of the year before that demand starts to dry up. Thus, we have the seasonal markets. Yet 2017 is not shaping up to be normal where silver is concerned.

The driving force in silver thus far has been base metals. That was not the case in the run-up to the 2016 presidential election. Rather, base metals were significantly behind until Trump won. They started catching up almost instantly on Trump’s promise to boost infrastructure spending after taking office. That promise is also what suggests that silver has not yet peaked in 2017.

Now could be a very good time to buy silver if you are the kind of investor betting on Donald Trump to keep his promises of rebuilding infrastructure and reducing taxes on corporations and small business. If he does, and Congress goes along, base metals could do very well at a time of year they are supposed to decline.

What the Cycle Says

The annual gold and silver cycle says that both precious metals peaked in April before declining. Silver tends to fall sharply from May through June, then stabilize in July before beginning the upward trend in the fall. Conventional wisdom says hold on to your silver through the summer; if you plan to buy, do so before mid-summer.

Conventional wisdom still prevails despite the political turmoil in the U.S., UK, and France. Commodities traders believe the tried-and-true cycle of silver will go on as normal. What do you think?

While you are thinking about the annual cycle of silver in relation to current political turmoil, there is one more thing to consider: President Trumps recently released tax cut. If Trump succeeds in getting everything he wants, and that is not beyond the realm of possibility, silver could easily become the runaway favorite among base metals. Before you dismiss this idea as being crazy, take a minute to think it through.

Trump’s tax proposals include a reduction in the corporate income tax from 39% to 15%. The president also proposes eliminating nearly all the tax deductions currently in place and reducing the total number of tax brackets from the current seven down to three. Finally, Trump is proposing a temporary ‘tax holiday’ for American corporations willing to repatriate profits they have sent overseas.

Succeeding with all these proposals would instantly stimulate the economy at a level we have not seen in more than a decade. It would encourage companies to bring manufacturing back home. It would put people to work who, in turn, would pay income taxes and boost government revenues. If expectations were strong enough, they would spur a run on base metals that would include silver and copper.

The question is, can the president get it done? There is a good chance he can. We already know that the proposal closely mirrors that offered by Speaker Ryan, so the House should not have any trouble getting the package through. As for the Senate, the GOP is already fearful of losing control in 2018. Passing the tax proposals could, and should, help them maintain that control.

None of the tax proposals offered by the president harms the average Joe on the street. That gives the Senate the confidence it needs to pass the proposals even without Democrats support. Lower taxes for everyone equals positive votes for the GOP.

With all this analysis now at your feet, you are probably wondering whether it’s a good time to buy silver or not. Obviously, no one can provide a concrete answer. Precious metals in general, and silver in particular, tend to be volatile throughout the year. Even with an annual cycle to look at, you never really know where silver is going from one quarter to the next.

Whether you should buy silver or not really depends on where you think base metals will go for the remainder of 2017. The demand for silver as a precious metal is not likely to have any real effect on the market until the start of the annual climb in December. Right now, it is all about base metals.