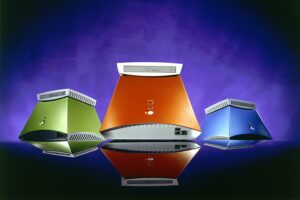 Last week Intel and Microsoft announced a partnership to create a next generation of PCs that blended high design with concepts like Amazon Echo’s unique voice first interface into the next generation PC platform code named “Evo”. This highlights one of the big mistakes both companies made exiting the 1990s, they started taking PC for granted and most of their efforts to advance the platform were defunded as they turned PCs into a cash cow. The result of that strategy was the near collapse of the PC market last decade. But both firms, Intel with their 2-in-I efforts, and Microsoft with Surface, have slowing been putting resources back into creating excitement in the market and this has helped create some really interesting products like the Lenovo Yoga Book and the Microsoft Surface Book both of which showcased a massive amount of innovation in a segment that desperately needed it.

Pat is over running VMware now but when he was one of the most powerful folks at Intel he ran an effort which pitted PC designers against each other to create new amazing designs and products. The Pyramid design which is at the top of this column that came out of that effort was one of the most compelling even though I don’t think it ever made it to market. This effort, similar to what Intel and Microsoft launched with Evo, kept the industry focused on looking ahead and on creating products that were not only innovative to use but very attractive. They did keep this going into the 2000s but they really didn’t promote it much and the designs drifted toward ugly.

Ironically Apple was initially the only company that stayed focused on design once the intel program was scrapped only because Steve Jobs personally believed in the importance of products people lusted after as opposed to products that were cheaper and this focus was one of the reasons Apple did so well under Jobs.

In the end, though, in my mind, it was Pat Gelsinger that got this right first, at least from Intel and Microsoft’s perspective, and his effort remains a showcase for what Evo should evolve to become.

One aspect that won’t be the same is the extreme focus on security this round. Security, which was a relatively low priority in the 1990s, unfortunately, is now one of the biggest problems to overcome and Microsoft Hello and Intel’s security unit have been focused tightly on making it less of a problem. This means that the Evo class of PC will aggressively move away from easily hacked passwords to biometrics based on fingerprints, voices, or facial recognition. We’ve known that Passwords were inadequate since the 1960s and it continues to amaze me how long these things have hung in there.

A PC For The Future

These Evo PCs are expected to be designed for the future and embrace emerging and coming technologies like VR, AR, Mixed Reality, Artificial Intelligence, and the next generation of gaming aggressively. This means they will embrace improvements in processing power, graphics, and even how processing is done (like using neural networks) aggressively so that they can not only more easily morph into wide variety of things the user wants to do but become a precursor to the robotic assistants we are eventually going to end up with. Call it sort of a bridge category of PCs, not yet intelligent robots, but with many of the capabilities and initial personality aspects that those future robots will refine.

Wrapping Up: The Rebirth Of PCs

There is really no other way to put this better than saying Project Evo is effectively a collaboration to create the bridge between robots and current PCs. I also think we’ll see some amazing advancements on what PCs look like and this will lay the foundation to assure that the PCs in the 2020s won’t look anything like the PCs this decade and that it is efforts like that that are needed to bring PCs back to the devices to lust after they once were.

How the Internet Has Improved the Cost of Traveling