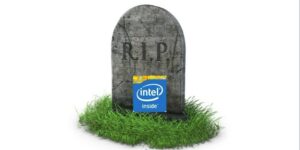 I’ve followed Intel nearly since its inception and, for the most part, its success was largely due to the vision of one man, Andy Grove. His book “Only the Paranoid Survive” was a definitive consider the culture that made Intel into the massive power that it became. Sadly, Andy is no longer with us and Intel’s leadership has begun to aggressively make foolish mistakes and put the company at increased risk. Recently they even seemed to be repeating the mistakes made with the Pentium Flaw back in the 1990s.

Let’s look at some of the trends, some recent, that indicate Intel is self-destructing.

Under Andy Grove there was Dennis Carter who has been recognized as Intel’s greatest CMO. He did the strongest job of husbanding Intel’s image and his iconic campaign was the based-on Bunny Men. If you go back and look at some of the spots they conveyed a sense of fun and excitement to Intel’s products and Intel became the first company of its type to get consumers excited about ingredients.

These were the PC growth years and people came to understand that the Intel Inside sticker conveyed quality, fun, and, given they’re preferences shifted to buying systems with Intel Inside, value. After Andy and Dennis left the Bunny Man campaign was killed with extreme prejudice and replaced by campaigns that instead seemed to simply focus on promoting a band (the Blue Man Group) or, most recently, on using TV talent to improve ad recall but doing little to raise or promote the values that the old Intel held so dear. It strikes me as incredibly foolish to use the one character in a TV sitcom that no one would ever take advice from, particularly technology purchase advice, and use him to provide that advice.

It should be no surprise that the PC market, over time, has softened and that people seem to care less and less about Intel being inside their PCs.

Intel’s focus on cost cutting has significantly damaged their industry support. Perhaps the biggest mistake was the elimination of IDF, or the Intel Developer Forum. This was the one annual reminder that Intel was the big company in town, this event eclipsed similar attempts by both AMD and NVIDIA and focused developers sharply on Intel while reminding everyone else of Intel’s importance to the ecosystem. During the same period Intel cut back significantly on their outward facing resources the different organizations that interfaced with reporters and analysts were cut to the bone dramatically lowering Intel’s ability to both communicate and to respond to crisis.

With the death of IDF NVIDIA, not Intel, has moved into that center stage and increasingly appears to be the company to beat and AMD has strengthened significantly slowly changing from second tier player to near peer.

It takes 3 to 5 years of steady effort to change the impression someone has in a company from negative to positive. However, it can take just moments to change the impression from positive to negative. IDF and Intel’s reduction in outward facing resources has made Intel seem smaller and less significant than they are, and no place has that become more obvious than in their recent security issues.

There is some irony here because Intel seemed to understand well in advance of their recent security problems that security needed to be something where they excelled. They bought McAfee to architect in a security advantage but then failed to execute and today, rather than being more secure, they may be the least secure processor in the market at scale. This is particularly problematic given they are heavily penetrated in government and military solutions which have little tolerance for vendors who sell unsecure parts and don’t notify of security problems timely. Right now, there are three major problems that are either unique to Intel or where Intel has the greatest exposure. The first was reported back in November and was connected to Intel’s management engine, the second was reported in January right after Intel’s CEO sold every share he could legally sell and is even more problematic (and doesn’t just involve Intel), and the third, and most recent, is with Intel’s exclusive system management component (AMT).

Intel now plans to create an internal security group, something they kind of had with McAfee before they divested, to address problems like this. Or, instead of being a leader, now, regarding security, they appear to be performing below their competitors and are starting from near scratch to catch up.

This last raises the likelihood of a government driven recall (CERT is clearly setting up to drive a recall) significantly higher. Such a recall would cripple Intel.

Wrapping Up: Intel Has A Critical Leadership Problem

Granted I could get there by simply focusing on that insane stock sale by their CEO which has to go down as one of the stupidest things I’ve ever seen a CEO do (it hasn’t been going well for him since the start). Granted worse would be implicated in one of the Silicon Valley sex parties, but given the names of the attendees have yet to be released… (though the names are starting to come out with some rather strange attempts at damage control). This is likely why the related book, Brotopia, is selling really well even though it won’t be out till next month.

The likelihood of Intel being driven to do a massive recall seems to be increasing every week and such a recall would likely cripple the firm enough, given it would also kill sales, to effectively push the firm over the edge. There are already discussions of replacing Intel’s CEO, I expect those discussions to advance significantly over the next few months but, so much damage has been done, I have doubts that a new CEO alone will be able to fix this. Brian Krzanich (even the Motley Fool is pushing for his termination) may go down as the CEO who killed Intel, and this is in sharp contrast to both AMD and NVIDIA’s CEO who have received substantial credit for their work in their respective companies.

In any case an excessive focus on cost reduction, which goes directly against Andy Gove’s guidance, is crippling Intel in how the firm is perceived, in their ability to avoid and respond to problems, and most recently from their dramatic fall from security leader to security joke. Bigger companies than Intel have failed because of decisions and trends like this and, unless Intel changes course, we are likely seeing the last days of Intel.

Including seafood in your children’s diet – the guide

Here’s the Fastest Way to Get Your Ex Back