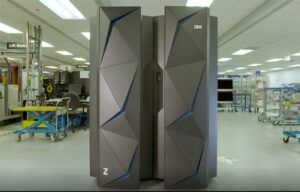 Certainly, the technology can obscure those doing transactions but if the data defining the transaction isn’t secure then the content of the transaction could be used to not only identify its nature but also undo the anonymity of the involved parties. That’s a very big deal since it effectively eliminates one of the main benefits of Blockchain.

To address this shortcoming, IBM just announced blockchain on their new IBM Z mainframe platform. The company’s mainframe has historically been preferred by financial institutions due to its robust, even remarkable transaction performance and security capabilities. The new IBM Z takes those standout features several steps further with pervasive encryption capabilities that cover all of the global data residing on the system. This also uniquely encompasses Blockchain transactions, providing what may be the most secure and reliable method to assure both the integrity and confidentiality of a transaction. One isn’t enough, you need both.

One of the fascinating things about the new IBM Z platform is also obvious–that it is basically a mainframe. Why is that a big deal? First, because IBM is the last company standing still producing this incredibly robust architecture. Moreover, in different forms and generations, IBM mainframe systems currently processes 30B transactions a day, including 87% of all credit card transactions. Annually, the mainframe manages 29B ATM transactions and 4B air passenger flights. Just as impressive, IBM mainframes support 68% of all IT transactions but those systems consume just 6% of IT costs.

It isn’t just big and robust, it is surprisingly economical. In short, the IBM Z is the world’s transaction power house and to ensure it remains that way, IBM enabled Blockchain to work on the system early on. Currently, IBM Z is the only Blockchain enabled solution in its class selling at industry scale. It was also arguably the first appliance computer at enterprise scale and much of its advantages come from the fact it isn’t built from an inventory of spare parts, it is purpose built to a complete specification. And that specification was based on the idea of having massive I/O which turns out, when it comes to transactions, to be an incredibly powerful optimization feature for a platform.

IBM early on figured out that Blockchain, which uses a multi-step authentication process for all sides of any transaction using it, was going to become a powerful transaction tool. The reason is that criminals are increasingly cracking traditional financial industry systems and fraud in many industries is beginning to run rampant. Because of IBM’s deep engagement with banks and other financial enterprises, it could see what most others did not, that Blockchain was effectively a killer app for banking and, subsequently, the banking industry has embraced it like a drowning man might accept a life preserver.

The entire concept of Blockchain is based on the idea of secure collaboration, making sure that none of the parties in a transaction are cheated while also enabling the process to be fully transparent to approved participants. But just securing the transaction clearly wasn’t enough.

IBM also needed to ensure that not only were transactions secure but the data that defined it was secure, as well. Otherwise, it was like providing a false sense of security. Yes, unsecured transactions are still valid, but without encryption aren’t fully, provably confidential.

The problem with encryption, particularly when you are talking about encrypting everything, is twofold. First, the process requires a massive amount of computing overhead as you are constantly encrypting and decrypting data streams. Plus, successful solutions must successfully manage and secure numerous encryption keys so that customers don’t lose access to their data (due to lost keys) and or allow unauthorized users to gain access illicitly.

This is all part of the IBM Z solution which features pervasive encryption at the touch of a button and without the disruption or increased costs connected with other encryption solutions. In effect, the combination of Blockchain and IBM pervasive encryption may be the perfect shelter from the cybercrime storm that will enable banks and other enterprises to enjoy far more secure transaction methods.

Due to IBM’s tight connections and decades of business with massive global financial institutions, the company saw a unique opportunity with Blockchain but also realized that Blockchain alone wasn’t secure enough. With the new IBM z14, the announced solution blending Blockchain with pervasive encryption should provide what large scale financial institutions desperately need. What is really amazing is this is all being done with the company’s most storied platform; the IBM Z mainframe. Three decades after being pronounced dead, the newest generation of the mainframe is still taking names and kicking butt. Go figure.

6 Things to Consider Regarding Storage Units

7 Productivity Habits From US Presidents