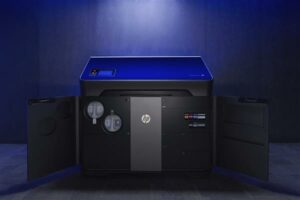 HP has been selling industrial 3D printers for about 9 months now, and many of their customers have multiple units and are in production. They have 65 scaled out resellers on the current products globally now. This week they announced the expansion of their portfolio with lower cost products and even broader distribution.

Let us talk about what HP announced and how this move will revolutionize manufacturing but expand prototyping and massively improve product customization at scale. Like a lot of technologies coming to market right now including advanced robotics, people carrying drones, and autonomous cars I doubt we fully yet grasp what this kind of change will mean to our lives. HP is estimating the eventual market to be $12T and they may be understating the opportunity.

We will explore the announcement and then spend some time talking about the eventual future and how 3D printing is likely to change dramatically what we buy and even how we buy it. At the heart of this is HP’s view on revolutionizing innovation and they have made impressive progress.

The first part of HP’s announcement is the introduction of color. Much like the way paper printers came to market you initially could have most any color you wanted from HP as long at that color was dark gray. In addition, the first set of industrial grade printers were prohibitively expensive and while the strength of the parts were impressive they were not particularly attractive.

HP announced a lower priced line ranging from around $50K to the low $100K range. Still not cheap enough to have in your home, unless of course you are Bill Gates or Jeff Bezos. Entry level is black and white, and parts limited to 7.5”x10”x9.8”, top of the line is full color and 7.5”x13.1”x9.8”. Both Black and White and Color come in both production sizes. Production speed is around 52 parts in 15 hours or 5 parts in 4 hours for a short run (this includes cool down time). At this speed the result is functional prototyping, building short run test parts used to test and refine designs before they put into production.

However, the quality level is good enough for short run manufacturing and custom parts.

There are two painful problems that 3D printers can massively help with for design departments in manufacturing and companies. The most visible is time to market. Even though we have advanced digital creation and 3D rendering massively and improved our ability to virtually view and test that design using high end PCs and workstations, and more recently, mixed reality goggles.

But moving these digital concepts to reality has been problematic because of the amount of labor needed. A big part of the problem is that until you have something physical to assemble the design team does not get a real sense for the problem and layered decisions can result in unanticipated problems. In short, these entities need to not only build a digital model quickly they need to be able to build physical models they can touch and test often in multiple variants so that the result is optimized not through multiple generations over years but initially.

The other problem is spare parts for aging hardware. Manufactures often are required to support old products for a decade or more and over produce parts based on an estimate of how many spares they will need during that time. They often underestimate resulting in painful outages for customers which can drive those customers to other vendors. And after that support period is over, getting spare parts becomes far more difficult often needing the customer to buy used hardware and part that hardware out to supplement the declining source of spares.

Once the company has a 3D image of the part they can use a 3D printer to produce it providing what is effectively a never-ending parts source. This should help keep customer loyalty and give an added revenue source to the implementing firm.

Wrapping Up: Into The Future

HP is one of the few companies that gets that the current world is about to massively change and, once that change is done, companies that are left behind will be history. Robotics in general and 3D Printers (which are focused robots) will be revolutionizing everything we touch. It amazes me how few of HP’s peers even see this coming.

The future they are imagining is not based on fiction, I think anyone with eyes can see the massive revolution coming. It reminds me a bit of the early days of computing, IBM was in control for the most part and the hardware was both wicked expensive and very limited. Within a few short years we had more powerful and far more affordable machines on our desktops and in our backpacks. Now we have even more powerful capability in our pockets (a pivot that mostly passed the PC and Mainframe companies by completely).

I expect in about a decade we will have the ability to download designs for items we need, use Augmented Reality to position and assure them, and then send the design we purchased to our 3D printer. Rather than same day delivery we could have our choice, customized in design and color to our unique needs, out of our 3D printer in minutes. Not just static parts either, complex designs blending metals and plastics, and potentially electronics will eventually come as well. Stores will be able to give you appliances in any color and unique to your home, car dealerships will be able to customize your car (or build you a unique vehicle) even more than they now do, and even your clothing will be printed on demand. Even printed food is on the horizon with flavors and presentations unique to your palate and sensibilities.

The world is at the cusp of massive change, I wonder how many companies will still be around when that change is done? HP is making damn sure they are one of them.

NewEra – using the blockchain to reward individuals for being Green