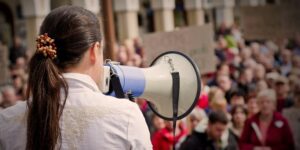 It used to be that you could get away with saying something slightly controversial or taking a bold stance that the majority didn’t agree with. Today, you’ll not only be lynched by the internet’s “Thought Police,” but you’ll also find yourself a victim of the viral nature of social media.

How to Protect Your Brand Image

Spend some time on Twitter, read comments on blog posts, or skim the headlines on popular websites across the political spectrum and you’ll see people are going crazy. In fact, it’s easy to think that you’re actually reading satire, when it’s intended to be real.

The internet and social media have given many people a sense of “virtual courage.” They can say and do things they wouldn’t do in person. While the ramifications of this are sweeping, one effect has been the rise of Thought Police, or people who have taken on the responsibility of constantly monitoring others and ringing the proverbial alarm bells when there’s any deviation from their prescribed way of thinking.

While the Thought Police are simply annoying in most situations, they can be downright dangerous for businesses and organizations that can’t afford to have their brand image harmed over trivial matters or momentary lapses in judgment.

There are plenty of examples of this, but some of the most publicized and familiar cases over the last few years have involved instances where bakeries have refused to sell cakes to same-sex couples because it violated their religious beliefs. In these instances, the bakeries that practiced their right to free speech were totally besieged by the Thought Police and their brands were greatly harmed.

It doesn’t have to be a religious organization, though. Any brand from any sector can be victimized by the internet’s Thought Police and the viral nature of social media. Thankfully, there are some ways to protect your brand and prevent PR disasters from causing permanent damage.

Plan for Every Possible Outcome

The more you can plan ahead, the less you’ll have to do in the moment. While not always realistic, you should try to plan for every possible outcome. By mapping out the short-term and long-term consequences, you can usually zero in on the best way to respond.

Know When to Lay Low

“It’s easy to feel pressure to respond to a potential crisis – and do it, fast,” media consultant Julie Loffredi notes. “But, sometimes stalling is a smart move.” In other words, there’s a time to act and a time to lay low. In situations where a PR disaster is isolated, your best plan of action might be to let it pass by.

Be Proactive in the Wake of a Disaster

When laying low isn’t an option, your best bet is to be proactive and get ahead of the problem. This means attacking the issue on all fronts and dealing with any potential negatives that could arise. There’s only room for one narrative in the media. Either you tell the story, or the Thought Police will.

Finally, make sure you convey empathy when confronting a PR disaster. The last thing you want is to come across as callous and defensive. Transparency and remorse are best – even when you don’t think you’re in the wrong.

Don’t Let Your Guard Down

No matter how hard you try, there will always be members of the Thought Police lurking in the shadows. Instead of constantly worrying about them, make an attempt to foolproof your brand and establish a system that prevents and mitigates PR issues in the age of the internet.

This is easier said than done, but this article shows that there are steps you can take.

How to Balance Text and Imagery in Creative Leaflet Design