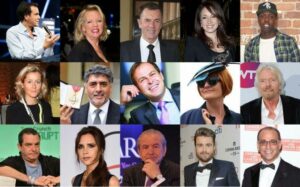 There are many different lists that are released around the world relating to the world’s richest people, the most successful people, the sexiest people, and more. One of these lists, which has been released on an annual basis for many years, is a list of the top 100 most influential people across the globe, which is released by TIME.

Recently on MSNBC Morning Joe announced that TIME had released its list for 2017, with a mixture of leaders, artists, pioneers, and icons. Many of those making the list were world famous artists such as actors and singers. Of course, Donald Trump made the list as did the British Prime Minister, Theresa May. However, a number of spots on the 2017 list were taken by business moguls and entrepreneurs.

The business moguls that made the list this year

There were a number of business moguls that have made the TIME list of the world’s 100 Most Influential People for 2017. Some of the names are well known around the globe while others may not be all that familiar. However, all have certainly made their mark in the world of business, which is what has resulted in them becoming so influential.

One of the well known names to appear on the list is Jeff Bezos, who is of course the founder, chairman, and Chief Executive Officer of Amazon. Last year, Bezos was listed as the third wealthiest person on the planet, which is a testament to the huge success of his business on a global basis. He is now thought to be worth close to $78 billion so he continues to be one of the richest people in the world as well as one of the most influential.

Another entrepreneur that has made the list for this year is Vijay Shekhar Sharma, who is the founder of the Indian payment system Paytm. While his name may not be as familiar as that of Bezos, he is still a hugely influential person as well as a very wealthy one with a net worth estimated at around $1.3 billion.

Evan Spiegel is yet another businessman to make it onto this year’s TIME list. Spiegel is the co-founder and Chief Executive Officer of Snap, which is the parent company of Snapchat. Still only twenty-six years of age, Evan has amassed a fortune from his social media platform and is now thought to be worth around $4 billion. Melinda Gates, the philanthropist, and wife of Microsoft founder Bill Gates was another well known name on the TIME list.

These entrepreneurs have not only provided other business people with inspiration and hope but have also done the same for individuals. They have managed to work their way up to become hugely successful on a worldwide basis hence appearing on lists such as this one. Their influence in the world of business has been huge and some have become household names as a result of their success.

5 Hiring Mistakes That Will Destroy Your Business