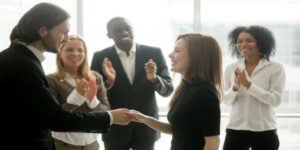 There’s a secret to retaining employees – are you listening? Come closer. The big secret? Treat them well. Surprised? You shouldn’t be! Have you never heard the saying “you’ll catch more flies with honey than vinegar”? Simply put, being sweet and treating people well will always increase their loyalty and help encourage them to be productive for the hiring company.

Too often do we hear of manager run-ins and employees expected to work late as the Director waves goodbye out the door. These are poor working practices. If the managers and executives in the company don’t work hard or treat their employees well, you aren’t going to have much of a workforce left.

Particularly as unemployment levels start to drop and the number of start-ups reached record high numbers over the last few years in both America and the United Kingdom. People know they can move to another company with relative ease and if you aren’t treating them well, they aren’t going to be slow about it. Some businesses (mainly in the hospitality industry) have even had to close their doors due to their lack of staff, so the mindset of going through staff like ice in the summer isn’t going to keep you afloat.

Can go a long way! Show your employees you value them; provide them with the support and equipment they need to do their job to the best of their ability. If you work in modern technology but your employees are working on Windows 98 PCs, they probably aren’t getting a lot done in the day.

Ensure your employees know exactly what is expected of them, many new hires complain that they are left without clear instruction for the first week or two of their employment, which led to them feeling devalued and sometimes resentful. When the time was available to teach them the ropes of the roles, sometimes these new hires had already lost interest and were looking for a new position in a different company.

While it may seem obvious, ensuring your employees are paid fairly for their role and expected workload can be a sore point. Businesses don’t want to pay out more than they have to and certainly not without seeing what the employer is capable of. A probational pay-period can often be the saving grace here but can also be off-putting to potential hires.

Businesses that haven’t hired into a new position for some time or are expanding with further positions should consider a salary or pay scale survey which can provide important industry benchmarks for executive and job remuneration. This way you can still pay fairly in regard to the company structure while ensuring you stay level or above your competitors. PayData offers information on obtaining a salary survey for your industry.

Offering benefits to your employees can go a long way to retaining staff, although should be carefully considered. Simply throwing monetary gifts at your employees runs the risk of feeling impersonal and while will be appreciated, won’t contribute to your employees feeling valued.

Consider instead treating your employees occasionally to opportunities to socialize outside of work, through paid lunches or dinners. In addition, allowing employees to accrue extra paid leave or a couple of early closes will help promote a positive work/life balance.

While it all comes down to respecting the individual, understand that in huge workforces, employers can’t be expected to know everybody’s birthdays or big events off the top of their head. Instead, it should be about recognizing that your employees are genuine humans, with thoughts and feelings and things they hold dear to their heart. Managers should at least attempt to get to know their lower level staff and can be a huge contribution to an employee’s productivity levels.

Give your employees a bit of slack, you can’t expect them to work to the best of their ability if they’ve got emotional events happening in their personal life or more simply, on the hottest day of the year. Attention dwindles towards the end of the week, but as long as there aren’t lives at stake, managers shouldn’t need to bring out the metaphorical whip.

There’s no secret formula to getting the best employees and strict hiring practices can only take you so far. By showing your employees they are more than a desk-filler by being honest, realizing their potential and treating them like the individuals they are – you’ll soon have a productive, happy work-force that spread their joy to your customers and even help you get more business.

7 Tips To Help You Drive Safely With A Trailer