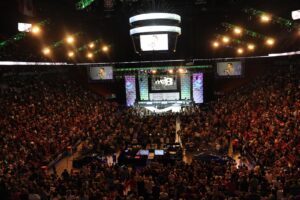 Fitness is the new mantra of the millennial lifestyle, and health foods and beverages are great contributors to that mission of wellness. Owing to this evolved consumer behavior, the last couple of decades have seen a huge increase in energy drinks around the world. In the United States alone, the energy drink market has experienced a jump of nearly 60% in 14 years where total sales are now approaching that of coffee in the country.

While this is good news for consumers and fitness enthusiasts, it also makes for a great opportunity for merchants to foray into the booming market of health foods. Take Vi, for instance. The multilevel marketing company has become a global healthy lifestyle brand by offering healthy replacement meal shakes, drinks, snacks and supplements across the United States, Canada, Mexico, Jamaica, the United Kingdom, and 11 European nations.

Initially launched as ViSalus Sciences by Nick Sarnicola, Blake Mallen, and Ryan Blair, the company was then rebranded as Vi in 2012 as part of their overall global growth initiative. The company established its headquarters in Troy, Michigan, with an office in Los Angeles.

In 2009, Mallen and Sarnicola leveraged the power of early social media and architected a new Challenge Marketing strategy and sales force that led to a 600% sales growth in one year, including nearly $2 billion in cumulative revenue and advancing its mission to transform “Life, Health and Prosperity” around the world. In 2013, The Body by Vi Challenge (“The Challenge”) was North America’s #1 weight loss and fitness platform, having helped more than 2 million people lose weight.

In 2015, at their National Success Training event in Fort Lauderdale, Florida, Vi introduced its audience to the NEON Energy Drink, marking its entry into the canned energy drink segment.

Within a month of its launch in the United States, Vi expanded its distribution of NEON Energy Drink across major nations in Europe including U.K., Ireland, France, Germany, Austria, Italy, the Netherlands, Spain, Sweden, Finland, Poland, and Hungary. With healthy drinks taking the global market by storm, Vi saw this as an opportunity to find its way into international markets.

As a stand-alone product, NEON has gained immense popularity among consumers. Named after the glow it emits under black light, the drink imparts a great fruity taste from natural sugars and other beneficial health ingredients like caffeine (from green tea), prickly pear puree, and essential B-complex Vitamins. Its neon color comes from an extract of the South American Cinchona tree.

By acquiring specific products and strategically introducing them in the market of high, in-demand health foods and drink brands, Vi found itself in a fast-moving global market space. With the phenomenal sales of these products, Vi is steadily fulfilling their vision to become the world’s most trusted and recognized healthy lifestyle brand, and is looking ahead to a future of many more such successes.

Michael Valor, The Prince of Pizza, takes Hospitality by Storm